David Bell: Inventing a smiley face prop that may save kids lives 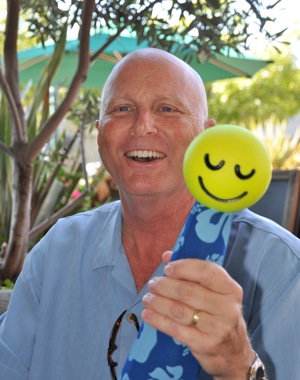 Even while David Bell worked as a financial executive at various Silicon Valley companies and startups, he had a yen for inventing and did it as a hobby. After reading about a 2007  tragedy in which an infant died from hyperthermia after being left in the back seat of a car by a distracted father, David transformed his hobby into a passion to invent something that could help save childrens’ lives.

He started brainstorming and creating prototypes in his garage. He tested materials and surveyed the market. The result is VizKID, a prop to remind the driver and passersby that there’s a child in the car. VizKID is 24 inches tall with a yellow happy face head that doesn’t restrict the driver’s peripheral vision. Constructed of materials widely used in auto interiors, VizKID is lightweight and flexible as well as safe, having passed flammability and other tests.

“There are 40 million vehicles with car seats in the back,” he says. “Young children fall asleep in the car. Most deaths from hyperthermia occur in kids three and under.” 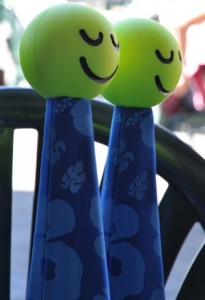 He admits that a major hurdle to getting VizKID into widespread use is parents belief that “it couldn’t happen to me.” But, believes Bell, “We all need to face up to the fact that we are all busy, and can become distracted, especially when we stray from our established routines. It’s something we can’t ignore.”

Bell is passionate about his belief that the VizKID can save lives and is spending his time educating others – a first stop was the Menlo Park Police Department who where enthusiastic about the prop – and talking to potential partners such as car seat manufacturers. He’s learned that while it’s a serious subject, education can include a bit of humor, which he’s incorporated in a new YouTube video.

Based on InMenlo’s visit with Bell at Cafe Borrone, there’s one sure way to get the word out. Bring a couple of VizKIDs with you everywhere you go – at least if the number of people who stopped by our table and asked, “What is it?” is an indication.

VizKIDs can be purchased for $19.95 online at Visible Kids and at Cheeky Monkey in Menlo Park.