Talking baseball – including those tortuous Giants – with writer Eno Sarris 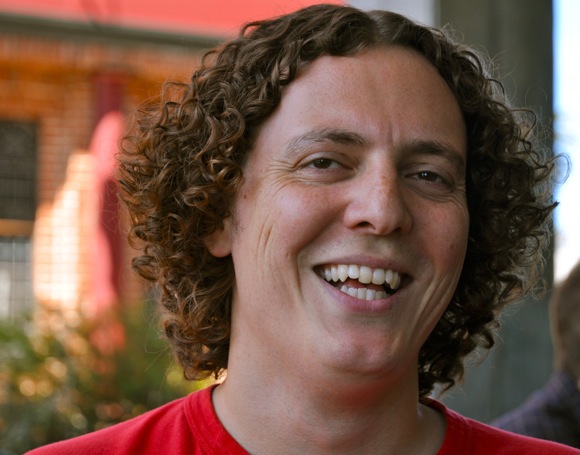 Jamaica. Germany. Atlanta. Mountain City, GA. Florida. London. Hell’s Kitchen, New York City. Add to the list Menlo Park, CA, where writer Eno Sarris and his wife arrived this past June. Why all over and why now Menlo?

“My mother’s a hippie,” he says in response tothe long list of “lived in” places, noting that Mountain City was a particular low. “Not much there, although as a kid I got to ride all over on my bike.

“The last place was Hell’s Kitchen, which we liked. But we couldn’t quite see raising a family there. I went to Stanford and my Dad’s in the City, so Menlo Park seemed a good choice, although I’m still adjusting. We lived on the ground floor in New York and our alarm clock every morning would be someone arguing outside. Now I wake up and hear birds chirping. It feels a bit like retirement.”

Eno is far from retired. The writer is a correspondent for four websites, all related to baseball and/or fantasy sports. He’s passionate about the game played round a diamond and the numbers that make it all the more compelling. “I love baseball. While in New York what resonated to me about the Mets was that there were in the same city as the Yankees. I love underdogs and I love puzzles. They’re still working on solving the puzzle part.

“I also love numbers. I was a big numbers guy in high school and college but lost interest. But now I’m into sabermetrics, which is the analysis of baseball based on math and baseball stats. There’s so much in the game that’ there are some strange mathematical truths. For example, once a ball is put into play, it’s a hit 30% of the time.

“Every moment of baseball is laden with such tension and at the same time, it’s also a succession of frozen moments. It’s not only the numbers. If you do see trends, the unique becomes more unique. Baseball is the best reality TV of all.”

About those tortuous San Francisco Giants

For San Francisco Giants fan, “tension” this year was renamed “torture.” Now that the Giants have won the National League West, he talked about what sports writers have referred to as the Giants disproportionate number of  home runs in their run production. “One thing I know about home runs is that 10% of flyballs are typically home runs and if you are too far from that number, it either means something about your park or the sustainability of that production. The Giants are at 9.9% home runs per fly ball, so they haven’t had fluky home run power as a team. Instead it sounds like the Giants aren’t that good at getting runners on base and scoring through non-home-run means. In fact, their walk rate is below-average and in the bottom third of the National League. I think most Giants fans know subjectively what the numbers say objectively: It’s not a great lineup top to bottom, but they have some power and the pitching helps them win the close games.”

Now that he and his wife are settled in Menlo, Eno, who was named for musician Brian Eno, hopes to write a book. “I always thought my first book would be about my upbringing,” he says. “Home is where I called it; I was always out of sorts and not feeling like I belonged. But now I’m thinking it may be  abaseball book, something about the fake divide between the baseball numbers people and the traditional people. ”

As for home, says Eno: “I haven’t lived in Menlo Park for long but it sure feels like home.”