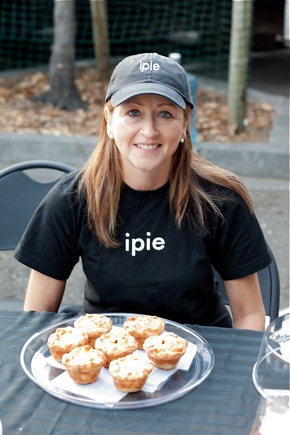 Patricia Kline has always had a passion for baking. As the youngest of five children growing up in Indiana with a mom that worked, the way to get quality time with her mother was to bake with her. “In the Midwest, the way you communicate is through baking,” she says.

After an early career in high tech PR and then time spent running a commercial furniture business with her husband, she turned to experimenting with little individual pies, which she called ipies. During the same period, her mother was in the end stage of Alzheimer’s disease. “Feeding her and talking about my pie stories seemed to calm her down,” Patricia recalls.

After her mother died, the pie-perfecting experiments stopped for a time, but the idea of doing something related to food kept gnawing at her. She started a dessert blog and began doing some food writing and recipe testing. Then she took her ipies to market; she’s at the Palo Alto Farmers Market every other Saturday.

“I bake just enough to sell at the market,” says the Menlo Park resident. “I’ve gotten a following and people email me to save ipies for them to pick up. I’m hoping that my market participation is a foot in the door for other things. I’d love to go to pastry school, do some teaching, write a cookbook.”

Patricia knows that unexpected things can happen. Months ago she’d queried O Magazine about her ipie story. To her mild astonishment, an editor took interest and an article about Patricia and her ipies is in the November issue  now on news stands.

Oh, we should mention this: The ipies, with fillings that change with the season, are delicious!