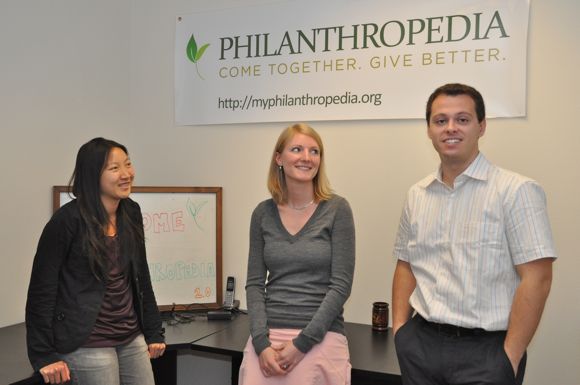 Silicon Valley has a bucketful of Stanford dorm room started businesses, backed by big VC money. Deyan Vitanov, Erinn Andrews, and Dawn Kwan (pictured right to left) did meet at Stanford but their story departs from typical. The three first met at a campus career fair focused on the philanthropy, and they’re year-old start up is a non-profit, Philanthropedia, funded by the William and Flora Hewlett Foundation.

Officially launched last November with the release of its first website, Menlo Park-based Philanthropedia helps donors pool their resources to support nonprofits. A key differentiator is the new vetting approach they’ve developed, using experts who work in the sector to identify top non-profits rather than relying on financial metrics and ratios.

“Our goal is to help people give more holistically,” says CEO Deyan Vitanov. Adds CEO Erinn Andrews: “We bundle the top five nonprofits in a particular area; people can donate to the fund or put their own portfolio of non-profits together.”

When the non-profit incorporated in June 2009, it had one cause (national education) and eight nonprofits recommended by 39 experts. Now there are 12 causes with 182 recommended nonprofits by almost 1,400 experts.

Earlier this month the team launched a new Philanthropedia service, still in beta, called “Expertise on Demand” that’s designed to act as an intermediary connecting major donors, philanthropy advisers and foundations with experts who can more efficiently channel money to high-impact non-profits and projects.

“We believe we have a great chance to change the face of philanthropy,” says Deyan.

“There’s not been a lot of innovation in the space for a decade,” adds Erinn. “Our rating system is disruptive in its new approach. It has the potential to reach all generations and transform giving.”

Dawn Kwan, the nonprofit’s economist, is in agreement: “This may be charitable giving for the masses – it’s exciting to be working on something that can actually make that happen.”