Protea and other exotics for sale at Menlo Park farmers market 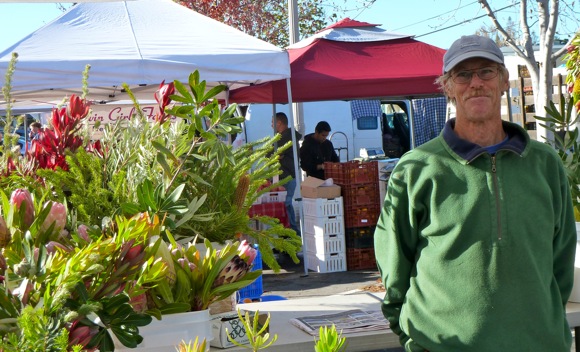 Michael (pictured) and Bettina Astone have been growing a large variety of proteas and other exotic plants from South Africa and Australia at their Aptos farm since 1981. Michael explains that they are a “dry farmed” flower producer; their plants are only watered the first two summers after planting. Like the flowers’ countries of origin, they’re planted on sandy soil hillsides that drain water. No fertilizer or mulch is used.

The Astones bring their exotic flowers to the Menlo Park farmers market nine months of the year, absent only during the summer months. At this time of year, the sell seasonal wreaths and centerpieces as well as bouquets. They have a loyal following. “Our customers know they can’t buy the flowers anywhere else,” said Michael. 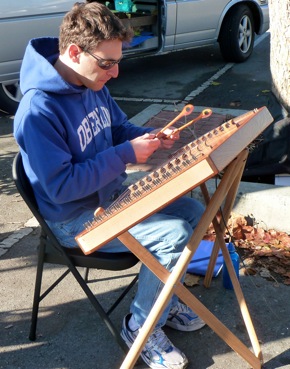 Also spotted at today’s market – where many stalls were empty, taking the Sunday off post the Thanksgiving holiday – was Raphael Bivas, a “hammered dulcimer player.” Bivas graduated from Gunn High School before attending Oberlin where he majored in neuroscience. He specializes in Celtic and old time music.