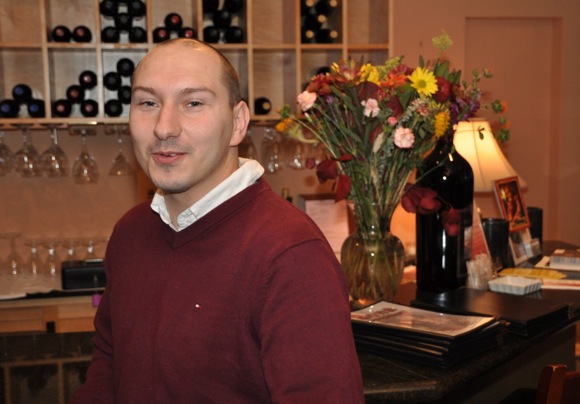 Artur Wlodarski, a native of Poland, has been in the U.S. for just a year but already has two babies, one American and the other Polish. His daughter was born two months ago; his restaurant Bona, serving food from his homeland, opened three months ago. “I don’t sleep,” he says.

That he’s running a Polish restaurant in Menlo Park has to do with coincidence and a tough job market. Not finding work but with a background in the hospitality business, he agreed to go into business with his uncle – Greg Ryczkowski – opening Bona in the space vacated by an Italian eatery on Maloney Street around the corner from the post office.

“Initially, we were going to continue to serve Italian food and have Polish Sundays, but we gave up the dual menu soon after opening,” Artur says.

The restaurant is named for a Polish queen – the Princess of Milan who married a Polish king – and staffed almost entirely by Poles. The chef is Feliks Janiszewski, who spent a number of years at Old Krakow, a much-admired but now closed Polish restaurant in the West Portal district of San Francisco.

“Most of our customers have no expectations because they have no experience with Polish food,” says Artur. “When I ask them what they’ve tasted before, they tell me ‘Polish sausage.’ When they return, it’s not so much to have a favorite as it is to try another new dish.”

The menu currently is not large but does offer food not available anywhere else in the Bay Area. (Or almost anywhere, Artur said he’s heard there’s a Polish restaurant in Walnut Creek.) Among others, dishes include sourdough soup (fermented in the same was as the bread, says Artur), pickle cream soup, stuffed beef and cabbage rolls, pierogis (similar to ravioli) and hunter’s stew (cabbage with mushrooms, beef, pork and sausage.) Wine (featuring Woodside Vineyards) and beer is currently served, and a liquor license is in the offing.

“We’re working hard to make sure everything is fresh with high quality,” Artur says. “We welcome what people have to say about the food. Our goal is to offer a warm and cozy restaurant where people aren’t rushed, in the European tradition.”