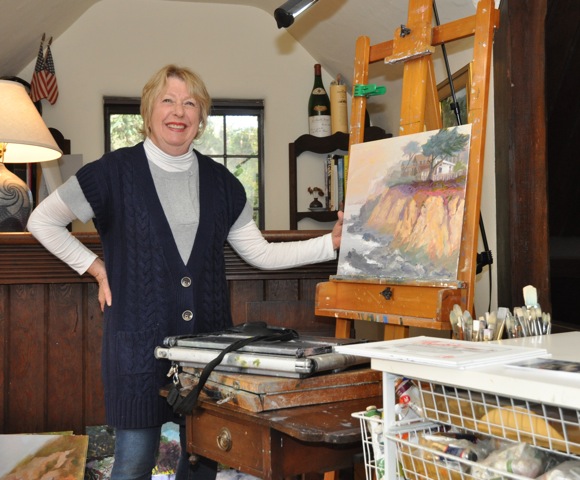 If it’s Tuesday, it probably means plein air painter Diana Jaye is on the road with Peninsula Outdoor Painters. “Another painter – Susan Watson – and I are sort of principals for the group,” she says. “Someone has to figure out where we’re going each week.” Mostly that’s someplace on the San Francisco Peninsula. “It’s a great group – everyone is so supportive of each other.”

Diana, who’s lived in Menlo Park for 40 years,  has been painting seriously since 1988. “I was always interested in art and I always wanted to paint but like most women I had to wait until the kids were out of the house.  I view my painting as something between a hobby and a business.”

Currently, a group of Diana’s paintings called “San Francisco Views” are on exhibit at the Viewpoints Gallery in Los Altos. She’ll be on hand to greet visitors in person on Dec. 18 and Dec. 29 from 11:00 am to 5:00 pm. 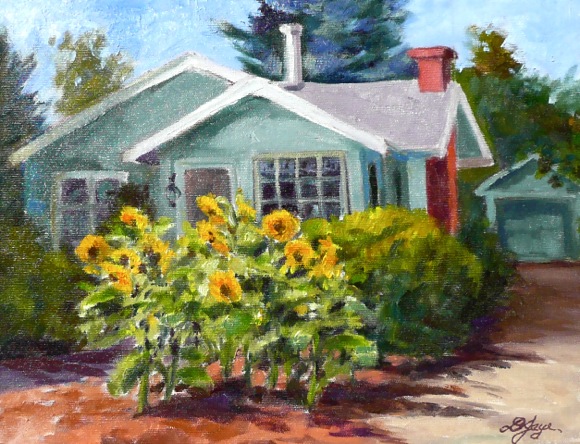 Her interest in plein art painting was sparked by Carolyn Hoftstader, among others.  Sometimes it’s something simple that catches her eye, like the sunflowers in front of two Menlo Park bungalows.

“I spotted the sunflowers in front of a house on University and knocked at the door to ask if I could paint them, ” she recalls. “He said, ‘My brother also has sunflowers in front of his house on Hoover St.,’ so I painted those, too. Turns out they’re the Johnson brothers whose father owned Johnson Pharmacy in Menlo Park for many years.” 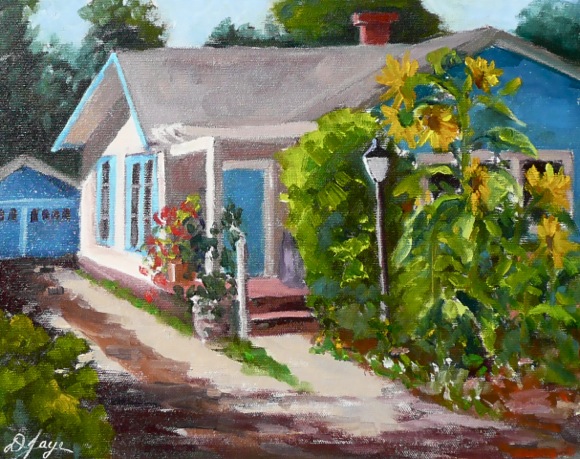 While the outdoors is really Diana’s studio, she’s carved out a small space upstairs in her lovely craftsmen style home in the Menlo Oaks neighborhood. “I paint two or three days a week and finish up inside,” she says. “I’m a fast painter – I don’t know why. It just happened. But that’s good for a plein air painter as you only have a couple of hours before the light changes.”

For Diana life is just about perfect. “I’m having a very, very good time. Life couldn’t be better. I have a lot of painting friends and we’re very supportive of each other. The camaraderie is great.”

Photographs of the paintings of the two Menlo Park bungalows with sunflowers, courtesy of Diana Jaye.

What a blessing to be able experience and interpret so many joys in life. Diana is an inspiration!

Again the painting are so beautiful! I know seeing them at the Gallery would be such a treat. I so want to make another trip out there. I have a grouping of your framed cards here above my computer to enjoy every day. Happy Holidays!

Love and Blessings to both of both! Life is wonderful!