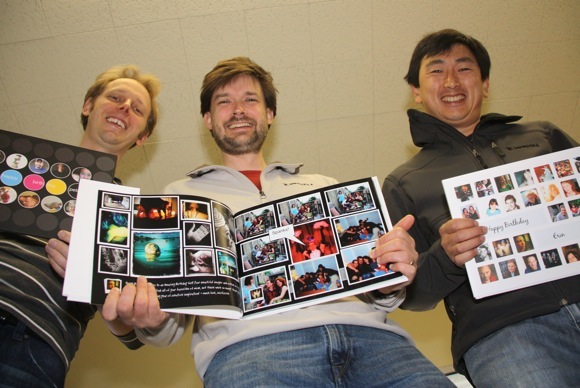 Ever tried to make a photo album with friends? Imagine if you could invite dozens – even hundreds – to put the album together and make it happen with just a few clicks and then turn it into a group gift, complete with Amazon gift card.

That’s the brand promise of the management team of Menlo Park-based Keepsy, a new product/service from the founders of StoryJumper profiled on InMenlo last year.

“We found that the StoryJumper (SJ) photo upload feature was very popular in schools and with parents,” said Blake Williams, VP Product/Marketing, shown in photo with CEO Peter Weck (center) and CTO Kai Zhao (right). “Probably 30-to-40% of SJ books are photo-centric and often have an album like quality. We wanted to extend the platform out of the children’s space and create something for ‘big kids.'”

Added Weck: “Every photo album site now has some flavor of social integration, but they are all bolt-on, after-thought features. As such, none of them really deliver a successful group album experience. Keepsy is different because it was built with collaboration at its core.”

Keepsy’s first release is the “Birthday Album,” a new take on traditional birthday cards, with the twist of combining ‘cards’ from as many as 100 friends into a single hardback keepsake album. The site’s integration with Facebook enables anyone to easily find a friend with an upcoming birthday and then begin an album.

The album initiator is then shown a list of shared friends to invite to the album. Invitations can be sent through Facebook or as a link in an email. Users can also access each others’ public Facebook and Flickr photos directly from the application, which solves the problem of mailing photos to one another. The digital albums are free, and the printed group keepsake albums start at $29.95.

“We expect to roll out a new theme – weddings, anniversaries, graduation – every three to four weeks through the first half of 2011,” said Williams. “You can expect a ‘generic’ album type to roll out soon that will allow users to create non-gift albums (e.g. class yearbook).

“Online photo album creation is a crowded and competitive space, populated with some very seasoned, talented players (Apple, Shutterfly, Kodak, Snapfish). Obviously, distinguishing your brand from the heavy-weights is a challenge. However, we think we have a very unique product and not something our competition can quickly or easily emulate without diluting the focus of their current products. We are most encouraged by the early feedback from our users.”