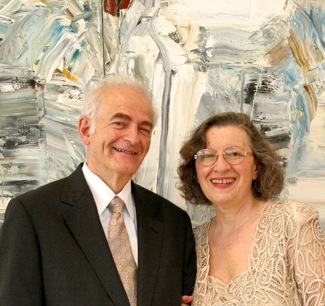 Today is International Holocaust Remembrance Day and Menlo Park residents Harriet and Bill Mohr are working to spotlight survivors, in particular those Jews who fled Europe and found safe haven in Haiti.

Retired Hewlett-Packard manager Bill is one of those refugees.  He spent 10 months in Haiti when we was four years old, prior to immigrating to the United States. That stay prompted the couple to start the Haiti Jewish Refugee Legacy Project just after the Haitian earthquake last year.

“We noticed the Israeli medical teams helping treat victims and realized that few knew the story about how Haitians had helped and protected Jewish refugees,” says Harriet.

The couple put together a blog and began searching for any of the 100 to 300 Jews who’d made Haiti their home, if only temporarily. Most still alive are now in their 80s and 90s.

Bill’s recollections of his time in Haiti are hazy. “My parents didn’t talk about it much,” he says. “But through the blog, I’ve connected with the Rosenberg brothers who were 10 and 13 at the time. They’ve been so helpful. Our families knew each other in Germany, and they would stop by our home in Haiti on their way home from school.”

The response to the Mohrs’ project has been very positive. They’re now thinking about applying for non-profit status. “We’d like to put together a traveling exhibit that goes to schools and colleges and are also interested in publishing a book,” says Harriet. “We want to extend our reach with a better website and teaching tools. We feel we’re just starting to spread our wings.”

Adds Bill: “The most important thing is to give back to Haiti, which is the country that save my life. The media focuses on the poverty, the crime, the various dictatorships. This is a way to shine a light on a very positive role the country played,  to help people see Haitians and Haiti in a different way.

You can get more details about Bill Mohr’s escape from Europe and time in Haiti on Jweekly.com.

Hi
My parents were born 1908 my father and Mother were born in Australia but my Mother can trace her ancestry to William The Conquerer 1066 the Irish “Coat of Arms” Broken but not Conquered” is the main stay of all we in Australia hold to be . ” Never give up”