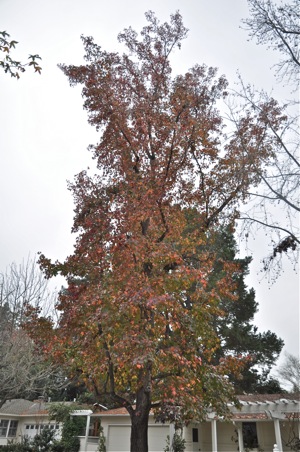 Drive down one of Menlo Park’s streets  lined with liqudambar trees (Cotton, Ambar, Oak), and you may be in for a surprise. While the brilliant color they display in November has faded, quite a few trees still have leaves – and it is almost February. We checked in with master arborist and certified tree risk assessor Dave Muffly to find out what’s going on with the trees that every one loves to hate (lots of clean up, including little, spiny balls). His reply, which includes comments about the recent spring-like temperatures:

“Climate change. It’s real, and the impacts are already obvious. 2010 tied for the warmest year ever recorded. Most of the warming has been seen in the evenings, and in higher low temperatures, particularly during the colder parts of the year. Thus, semi-deciduous trees like Liquidambar are able to hold their leaves longer. I encourage you to check local temperature records if you need triangulation on that.

There’s another factor at play. 2010 was also the wettest year ever recorded, globally. And it was plenty wet for us. Liquidambar is a tree with little drought tolerance, and thus is quite sensitive to either extra, or lacking, water. With all the rain in 2010, the trees have remained well-watered, and have not lost their leaves early to drought, which also commonly happens.

With our warm January, we’re already seeing flowering on some Pluots, and this week the first apples are breaking bud. Very early. Early spring. But it may well go back to winter, and the trees which have broken bud simply won’t progress.”