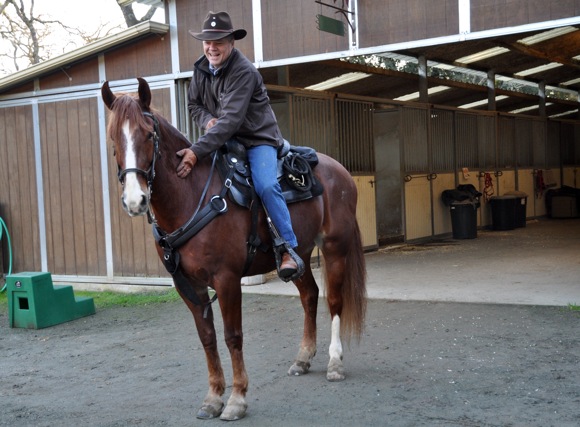 Raised in San Francisco, Dick Livermore migrated south to attend Stanford with his sights set on becoming a doctor. Decades later – and now a judge – he considers himself a healer of a different sort.

“When I entered Stanford, I would never have thought of myself as a judge,” he says, looking back. “But if you’d asked me if I’d be happy being a healer, I would have said, ‘of course.’  Now as a trial judge, I practice a kind of social healing.”

After graduation, Dick spent some time in Washington before returning to California to attend law school and get a graduate degree in urban planning. He settled in Menlo Park, where he raised his family and has remained. The location allows him to pursue many of his outside interests, including horseback riding, which he does from the Sheriff’s Mounted Patrol grounds (shown above on his friend’s horse Trigger).

Dick was appointed a judge of the Superior Court of California, County of San Mateo, in 1991. Prior to that he had his own law firm and was founding project director at an environmental dispute resolution firm.

“At law school, I wasn’t trained at resolving things; I was trained as a fighter,” he says. “But I’ve always focused professionally on how to repair things and worked on developing skills as a referee. The concept of being paid to be neutral, to be a dispenser of even-handed justice appeals to me enormously.”

Dick’s judicial specialty is dealing with people with substance abuse cases. Having done the job for 16 years, he’s the longest sitting drug court judge in California history. His tenure has been marked by both pragmatism and optimism.

“The old model of convict and  incarcerate clearly doesn’t work when you’re dealing with someone who is in the grips of serious addiction,” he says. “Yet, I’m of the strong opinion that true behavior modification can be helped by the threat of incarceration. I’m referring to the people who have a real chance at regaining a position of being useful citizens in society.

“I make the rules very clear and simple to help people evolve from the helplessness of addiction into a constructive member of society — to return them to a life where they can live free of the constraints of criminal activity. I think our country can be proud of our efforts, of putting into place procedures and programs that yield positive results.

“Obviously, I judge – that’s my job. But I’m full of hope in every case that the individual will reach a point, as the old adage says, that they’re ‘sick and tired of being sick and tired.’

He concludes: “Many can still be healed.”

Hello Richard, it has been a long time since you dropped
In to visit me at General Dynamics and I am delighted to see you on the
Bench still trying to save some of the unfortunates from themselves and
From those who prey on them. The world has turned many times since our days at Santa Clara. I am now at the verge of retirement from law practice up here in beautiful Blaine, Washington pushing nearly 43 years in the law. You can if so inclined take a look on Linkedin for my CV. Of course I would much like to hear from you and to have you meet my bride of many years.
My my