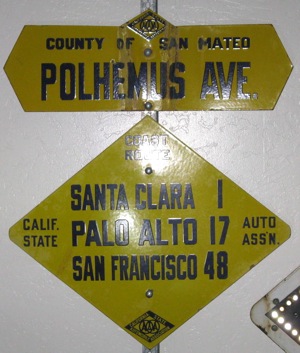 Showing that the InMenlo tentacles reach beyond the geography it covers, now Sacramento resident Brian Smith, who grew up on the Peninsula, reached out recently, complimenting contributor Jym Clendenin’s “Under Menlo” series. Brian had photographed some of the bridges over San Francisquito Creek, which Jym looked under, and felt a connection. He also wrote about his efforts to preserve a small part of California transportation history. Given that the holiday weekend means lots of people on the highway, it seemed like a good time to showcase Brian’s project.

“Since 1980 I have collected old porcelain enamel traffic signs erected from 1920 to 1960, by the Automobile Club of Southern California (ACSC), the California State Automobile Association (CSAA), and the old California Division of Highways,” he emailed. 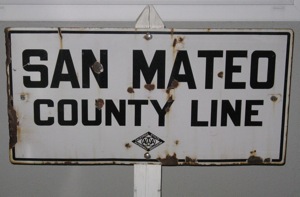 “My first job out of college was on the town of Atherton street crew in the summer of 1974. What a great job! I got my first sign from my boss. We were cleaning a yard, and I picked up a sign that was going to be tossed, a 1920’s CSAA, Polhemus Ave. sign that was erected on El Camino Real and the street of that name.

“In the photo, it sits above the Coast Route guide sign that was placed originally on the El Camino one mile south of Santa Clara.  A very special sign in my collection is a 1930’s CSAA, San Mateo County sign. Maybe it was once placed on the bridge over San Francisquito Creek!”

You can read more about the history of highway signs in California and view Brian’s collection on his website, CalTrafficSigns.