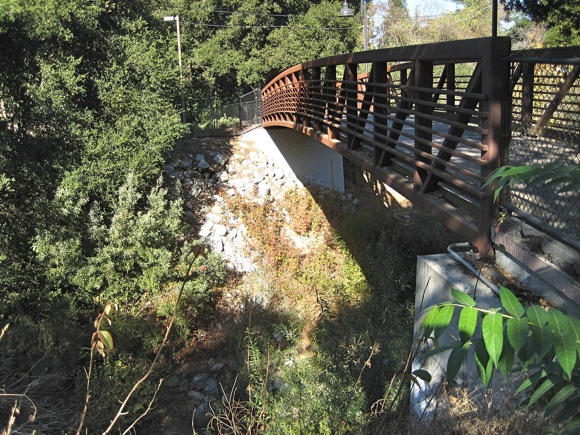 In 1888 Timothy Hopkins (1859-1936), the adopted son of Mary Hopkins, the otherwise childless widow of railroad builder Mark Hopkins, inherited Sherwood Hall, the massive 50-room estate that was located where the Menlo Park Civic Center is now. The Hopkins property included most of the land between El Camino and Middlefield and from Ravenswood south at least to San Francisquito Creek.

In the 19th century, a private covered-bridge over the creek was built opposite to what later became Bryant Street in Palo Alto. Leland Stanford contracted with Timothy Hopkins to design the original town of Palo Alto on property Hopkins bought for this purpose south of the Creek, so presumably the bridge was a convenient way to go between properties. 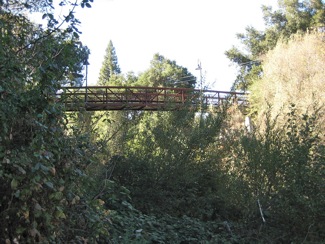 On April 13, 1942, the Palo Alto Times reported the Bryant Street bridge had been torn down. Sherwood Hall was never repaired after being badly damaged in the 1906 earthquake and was finally was torn down in the early ‘40s to make way for Dibble General, a military hospital. Dibble itself was torn down after WWII, opening up the property for the construction of today’s Civic Center and the Linfield Oaks residential neighborhood.

In the 1970s interest in building a bike/pedestrian bridge over the creek connecting Menlo Park and downtown Palo Alto grew. But access to the location of the old covered-bridge was blocked on the Linfield Oaks side. Just a block east was an industrial cul-de-sac, Willow Place, that was easily extended to the creek just east of Bryant. Bryant, which today is Palo Alto’s designated bicycle boulevard, is a short jog west from the bridge via Palo Alto Avenue.

A wooden bike/pedestrian bridge over the creek at the end of Willow Place was dedicated January 17, 1976, about a year before the similar wooden bridge at San Mateo Avenue (the Ohlone-Menlo bridge) was built. In early 2004 the wooden bridge was replaced by the present steel bridge. Like today’s Ohlone-Menlo steel bridge, it is five feet wide.

With especially high banks and thick undergrowth, the area under the Willow Place bridge is nearly inaccessible, especially from the Menlo Park side. Palo Alto Avenue hugs the opposite bank giving some flexibility for viewing from down under. The top photo looks in the direction of Menlo Park. The second photo looks west. Both were taken in late October 2010.

This is the sixth in a series of posts with accompanying photos by InMenlo contributor Jym Clendenin about what’s “under Menlo.” Read the first, the second, the third, the fourth, and the fifth.