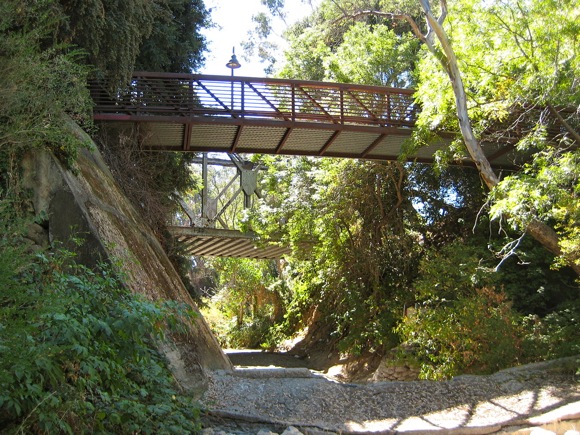 If you’re driving south on Alma Street in Menlo Park on a dark night after having drunk too much, you might be tempted to drive right across the pedestrian/bike bridge that crosses the San Francisquito Creek where Alma dead ends. In fact, that’s exactly what one DUI driver did shortly after the bridge was opened (officially on July 30, 1997). 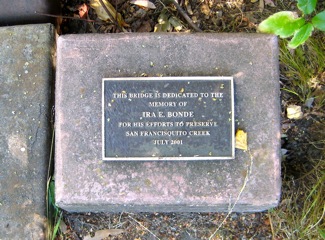 There are three locations along the creek with pedestrian/bike bridges between Menlo Park and Palo Alto. This is the last of these locations to get a bridge, but it is the first all-steel bridge. It’s dedicated to Ira E. Bonde (1918-1993), who was a longtime member of the Menlo Park City Council (1955-1978) and mayor (1969-76). In the last years of his life, Bonde served on the San Francisquito Creek Flood Control Committee.

This bridge is double the standard five-foot width to allow bicycles traveling in opposite directions to pass. The DUI driver easily traversed the 10-foot width, but the errant vehicle went on to collide with two parked cars on Emerson before finally hitting an occupied car on Emerson near Kingsley. 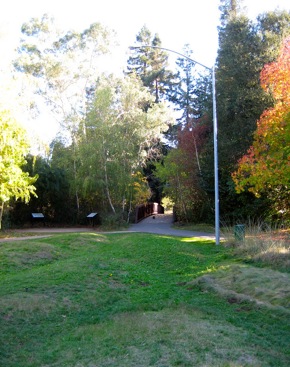 Today the approach to the bridge from Menlo Park is an eloquent series of undulating mounds planted with low-maintenance grasses that have a self-limiting growing height, thus not requiring mowing.

By contrast, under the bridge it’s a jungle. Access to this portion of the Creek is rather difficult. The banks are about 20-feet high, steep and covered with thick foliage including many briars. The photo at the top of this post – taken last fall – is looking toward the west showing the railroad bridge a 100 feet or so beyond the bike/pedestrian bridge. On the left (Palo Alto) is the concrete wall that extends to just beyond the railroad bridge and is believed to be the same wall that was constructed in the 1880s by the Stanfords to protect El Palo Alto (the tree) after one of the original twin trunks washed away.

Attached to the wall in the creek bed is a weir that leaves a small pool of water in dry weather, presumably constructed to provide a summer habitat for certain fish species. A bronze plaque dedicating the bridge is at the entrance to the bridge on the Menlo Park side. The plaque reads: “This bridge is dedicated to the memory of Ira E. Bonde for his efforts to preserve the San Francisquito Creek July 2001.”

This is the fifth in a series of posts with accompanying photos by InMenlo contributor Jym Clendenin about what’s “under Menlo.” Read the first, the second, the third and the fourth.

In the Centenial Edition published by the old Menlo-Atherton Recorder in 1974, it is reported that a news item from 1910 informs us that Mrs. Leland Stanford commissioned the Morey Brothers (who later founded Peninsula Building Materials) to put up a cement buttress to protect the roots of the remaining El Palo Alto.