Marianne and Jay Dean: Hooked on rowing on the Bay 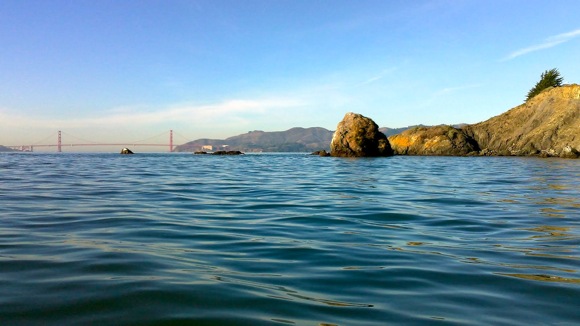 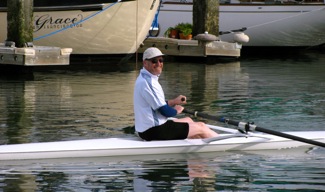 For Jay, it was a return to the sport he’d done in college (Princeton crew) and then as a member of the Open Water Rowing Center in Sausalito during the ’80s. Marianne took up the sport as an exercise regime, initially with a Peninsula group.

“We reconnected with OWRC and have been going up there at least once a week for the past year and a half,” says Jay. “The rowing at OWRC is a bit different from clubs and teams involved in traditional ‘crew racing.’ Almost all rowing is in singles, one-person shells designed for the open water, and folks tend to row longer and slower workouts.”

Jay explains that they usually go together but once there, they select different boats and take different routes. “My ‘regular row’ is a quick lap around Angel Island, which is about 16k or 10 miles and takes about 1.5 hours if I’m moving fast. My preferred boat is a Maas 24. I like to keep a steady pace and heart-rate, and move quickly.”

Newer to rowing, Marianne says, “just mastering the Bay is thrilling and empowering,” as she learns proper technique and gains speed. “I am at my best in the middle of the Bay, by myself, reading the ever changing tides and winds, being visited by seals, birds and porpoise, while crossing the shipping lanes knowing that I am invisible to the tankers and the only way to relative safety is by rowing the boat, stroke after stroke after stroke. While losing track of time, I am also hyper-focused on every moment, very meditative in a way.”

Adds Jay: “You can get very up-close and personal with the wildlife in a 16-inch wide shell. The Bay itself is never still. It’s always in motion and has a very changeable character. It’s fascinating to experience it so closely. It’s like it has moods. And of course this is a breathtakingly beautiful place to exercise.”

The Open Ocean Regatta is an upcoming competition scheduled for April 3. Both Jay and Marianne have entered, the latter for the first time. The race starts from the “seal sculpture” in downtown Sausalito, with the long course running out past the Golden Gate Bridge to Diablo Point and back under the Bridge to Belvedere, then returning to Sausalito. “The interesting challenge is getting out past the Bridge against a flood tide, which can kick-up quite a vigorous tidal rip,” says Jay. “It’s also a big party and meet-up for the area’s open-water rowers.”

Win, lose, or draw they are committed to their old/new athletic pursuit.

“For us, the experience of the Bay, the wildlife,  the weather, and the incredible beauty of the place is an important element,” says Jay. “A row is more than a workout, more like a mini-vacation.”

Adds Marianne: “I am hooked.”

Photos of Marianne and open water by Jay Dean; photo of Jay by Marianne Dean.