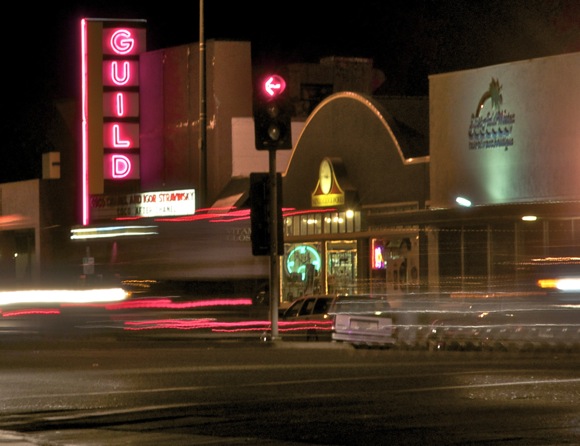 Talk about a mainstay. The Guild Theater opened in 1926 before “talkies.” Known as the Menlo Theatre for its first two decades, it has endured, surviving the proliferation of multiplexes. 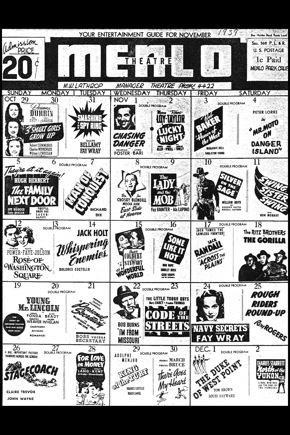 King of the Turf featuring Mary Carr and Kenneth Harlan was the feature presentation when the Menlo opened its doors on May 7, 1926, according to a report in the Palo Alto Times. An article written by William Henry in 1987 for the Country Almanac provides more details of the time: “In Menlo Park’s early days, especially during the Depression, people often had little money to spend on entertainment, older residents say. The Menlo Theatre, therefore, was always thinking up new ploys to lure moviegoers.

“A regular attraction of the last 1920s, for instance, was ‘Country Store,’ in which the theatre gave away dishes to women who attended.”

While the Menlo faced competition from Palo Alto’s Stanford and Varsity theaters, it wasn’t until the late ’40s that Menlo Park itself became a two-theater town. The Menlo’s owner, Al Lauice, built and opened the Park Theatre a couple of blocks away. (For a few decades, towards the end of the 20th century, the city had three movie theaters: the Guild, the Park, and a new Menlo Theatre on Santa Cruz Avenue where the Left Bank restaurant is now.) 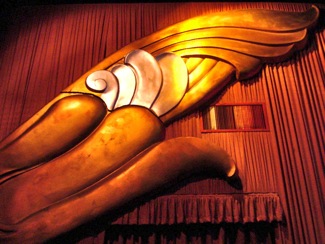 As long-time residents know, the Guild and Park actually complimented one another, with the Guild featuring, as it does now, more foreign and art house/independent films and the Park presenting more mass-market entertainment. With the Park closed since 2002, locals shuddered at the thought of losing the Guild, too, when it closed in February because of water damage. It reopened three weeks later. A proclamation by then-mayor Nicholas Jellins on its 75th anniversary on May 7, 2001 alludes to 3,900 consecutive weeks of film, and current Guild manager Rachael Wordhouse-Dykema confirmed that the streak continued until the recent closure. 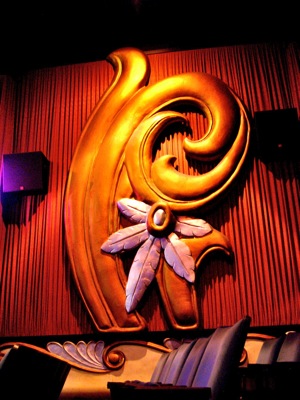 interested in the theater’s history and is an admirer of its interior. “Different pieces have come from different theaters,” she says. “For example, the seats are from the Act 1 and 2 in Berkeley, installed after those theaters closed down.”

She’s been told that the two most distinctive interior adornments — the gold wings and swirls — are also from elsewhere. The photo published with the 1987 Country Almanac story does show a different looking auditorium.

Now operated by Landmark, the Guild is one of the few remaining single-screen theaters on the Peninsula — if not the only one showing current films. “It’s really a great place to watch a movie,” says Rachael. “It’s wide and short, making for hardly a bad seat in the house. No one is super far from the screen and no one is too close.”

Jym Clendenin contributed to this post, tracking down supporting documents at the Menlo Park Historical Association.

Another interesting factoid: in the early 1940s, when El Camino Real was being widened to accomodate 4 lanes of traffic, 30 feet of the once spacious lobby had to be chopped off since the building was considered too large to move.

It is very regrettable that with all the billionaires, and affluence in Silicon Valley that a conscientious effort could not have been made to save this important cultural landmark. You go to the east coast and you will find that many downtown areas have a greater number of historical structures than modern ones. The Bay Area is just a reflection of the narcissistic society that pervades the Silicon Valley elite. What a change since the days of “Farms in Berkeley “, and riding your bike to see a Saturday matinee at the Park Theater. The loss of such important, and wonderful aspects of our culture will leave wounds on Peninsula society that will never heal