Bob Zider: Teeing up to change the game of golf 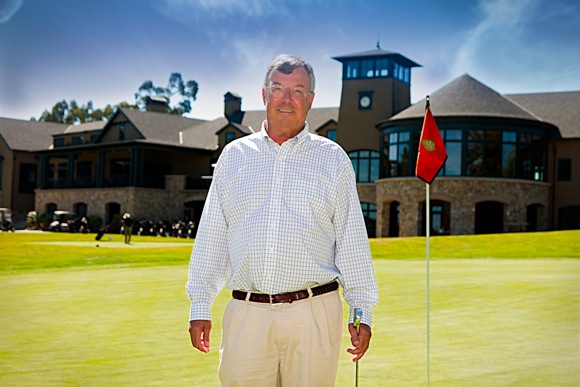 Bob Zider has golf handicap of 20 and likes it that way. (“There’s no pressure on you.”) He thinks playing eight holes is just about perfect. (“What is the magic of playing 18 holes in consecutive order?”) And he wonders why golf is a game where amateurs play by pro rules with sanctioned equipment. (“There are 40 million people out there who’ve already said ‘no’ to this.”)

Ambivalent about the game or not, after a morning discussing his latest venture, Project Flogton, he was ready to get back out on the course. “Golf should fun, accessible, and playable,” he said, sitting on the porch of the Sharon Heights Country Club in Menlo Park, where he’s a member.

He returned to the numbers: “There are five million religious golfers. There are 20 million non-religious golfers. And then there’s the other 20 million who invested in the game, bought clubs, took lessons, whatever – and dropped out. The way we look at it, this is backward. We’re looking at the 40 million.”

“We” are Zider, founder of the Alternative Golf Association/Project Flogton (“not golf” spelled backwards – a working name at the moment), AGA Commissioner Scott McNealy, CEO Pat Gallagher and legal counsel Damien Eastwood. They launched AGA in January to foster the creation and evolution of new games – “golf for the rest of us,” they call it – that could be played on existing golf courses. Of the four, only former Sun Microsystems CEO McNeally is an accomplished golfer – with a three handicap.

“Golfing is not an athletic sport, it’s a repeatability sport,” quipped Bob. “And what other sport can you have one bad hole and your whole outing is toast. Heck, you can pick your best time in the Olympics.”

The Project Flogton website details the new rules be proposed by the AGA, which include the use of non-conforming balls and clubs not considered “legal” for USGA play, one mulligan per hole (any shot) and eliminating social rules like the use of cell phones on the course, as long as it doesn’t impede play. In Flogton Max and Flogton Straightner, you’re allowed to apply Pam, Vaseline or any lubricant to the driver face, which can correct hooks and slices. There’s talk of an approach iron that has big grooves and different balls for different shots – drive, approach and putt.

“There’s been no innovation in golf in 50 years,” said Bob. “Handicaps have only dropped 1 in 25 years. We want to help you take your drive back up to where it used to be – but with a 100 mile an hour swing.”

To spur innovation, Project Flogton is staging the $10,000 Longest Golf Ball Challenge, deadline June 1, 2011. The prize-winning ball will be used for long shots only and doesn’t have to have dimples or otherwise look like a traditional golf ball. It must, however, test out for 25% more distance for players of swing speeds of 80 to 100 mph than current USGA-approved golf balls do, and meet the criteria listed in the Official Rules.

Is Project Flogton for real? “It only becomes real when we get enough data,” said Bob, noting that there are ample areas to submit ideas and feedback on the website. There are plans for iPhone apps, such as one that helps a player find a ball. “This game isn’t called hide and seek,” said Bob, who admits he’s pleased at the positive – and negative – buzz Project Flogton has generated to date.

“The polarization says this is getting to people,” he said “Someone is going to do something about changing golf whether it’s us or someone else. Currently it’s the six to 16 handicappers that hate us because they’ve worked hard to be mediocre. And then along comes a bozo like me.”

The warm spring sun on the fairway beckoned. “It’s such a great game,” he mused, “but why do they have to use the most expensive real estate to play it?”

That, of course, is another discussion.

Hi Linda, very interesting this article. I have played golf for 2 years and I don’t know what to think about these new rules. There are people agree and disagree.
Anyway, the content of the article is all positive and it is a great start of people would get a chance to read this.
Great work!
Trabajo desde internet