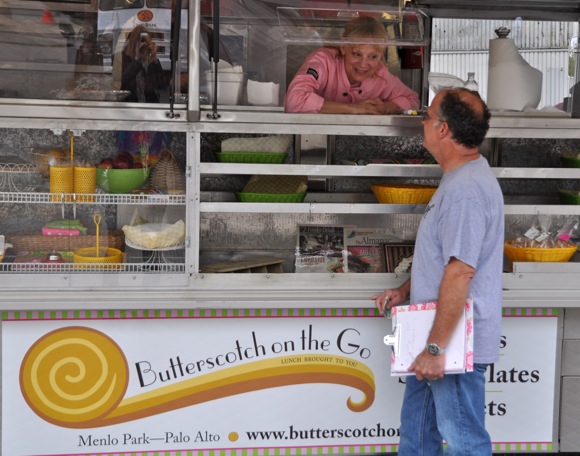 We vaguely remember news of a Monday food caravan gathering at the largely unoccupied Edgewood Plaza near 101 and Embarcadero in Palo Alto. But our interest was further piqued when Menlo Park resident Kathleen Jensen, co-owner with husband Bruce Goitia (both pictured), of Butterscotch on the Go, let InMenlo know that they’d been invited to take part in the now weekly gathering of food trucks.

Early on a cool, drizzly evening today – with many families on spring vacations – the enthusiasm garnered for the food being dispensed from the nine trucks was greater than the number of people, but Kathleen reports crowds in the hundreds at previous gatherings. Tonight featured seven savory options from around the globe along with two sweets, Butterscotch and a premium ice cream truck. Kathleen and Bruce plan to be there as often as they are invited by organizer and Crescent Park neighborhood resident Susie Hwang, who held the first Eats event last September.

Tip to Menlo Park residents who work in the South Bay and use Embarcadero Road as the route home: This is a great place to stop and pick up dinner! Edgewood Eats is open from 5:00 to 8:00 pm on Mondays.

Hi: Where can I find your truck? I heard about the butterscotch pudding and would love to get some. I live in San Jose but would travel to wherever you are. Thanks.