Kathleen Jensen: Taking her baked goods on the road 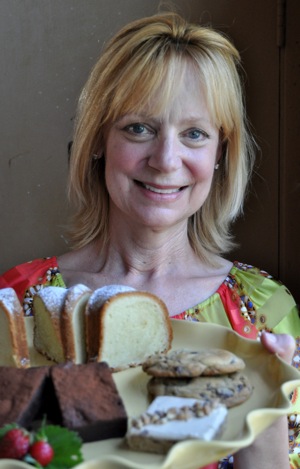 Butterscotch Bakery offerings are one big test kitchen for Kathleen Jensen. The former personal chef started her baked goods business in January, but it’s just a preview of things to come – a rolling bakery on wheels set to launch later this summer.

Kathleen says she’s always loved cooking and started taking classes over a decade ago. That led to a job cooking for anywhere from one to four families at a time. All along, desserts have been her passion.

“By selling directly to the public at The Mix and Cafe Zoe here in Menlo, I’m able to get professional bakery experience,” she says. “I’ve deliberately kept it small while at the same time gathering information about what sells and what doesn’t and what people say are their favorites.”

She and her husband, who recently retired from a career in public service, are currently working on transforming an old Red Cross truck – that comes complete with a kitchen – into a food truck.

“We ‘re thinking of calling it Butterscotch Bakery on the Go,” she says. “We’ll have  baked goods as well as composed desserts like butterscotch budino and some savory items.”

They plan to drive to Menlo Park locations with a high concentration of office workers but few places to eat.

Wondering why the name Butterscotch? We asked – it’s her favorite flavor, Kathleen says.

I’d love to try some of your baked goods, but don’t have facebook or
twitter.How do I find out where you’ll be and when????