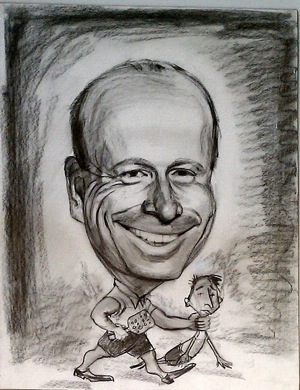 If you came of age in Menlo Park or Atherton during the late fifties or 60’s, you likely saw the image (left) more than once or at least you recognize the visage.  For over a decade, James T. Coffis, aka “Big Jim” or “Little Jimmy,” was the dean of boys (they were not yet called men!) at Menlo-Atherton High School, and the drawing hung on his office wall. It followed him to San Carlos High School where he served in the same capacity until his death at age 56 in 1971.

The portrait was then hung at the family home in Redwood City above a miniature piano (right) that became a favorite pastime of Coffis’ grandchildren. It now hangs in Ben Lomond, in a converted carport used as a rehearsal studio by  “The Coffis Brothers”.

Jamie (25) and Kellen (21) never met their grandfather, but they see him nearly every 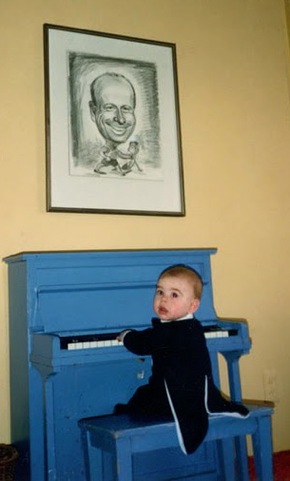 day and are fully versed in his exploits as a Stanford All-American halfback in the 1930’s.  The brothers, along with their band, The Mountain Men, will be performing at Club Fox on Broadway in Redwood City on Thursday, May 26. Redwood City’s Mike Annuzzi will open the show at 8pm.

Their music, as you might expect coming out of the Santa Cruz Mountains, is All-American rock and roll, but it covers quite a bit of ground and artfully exploits the harmonic vocals unique to siblings. Rooted in the traditions of American folk, rock and blues, the pair have quite a repertoire of original songs that include tender ballads, mid-tempo, easy listening pop tunes and full on rock anthems that take advantage of their five piece band. 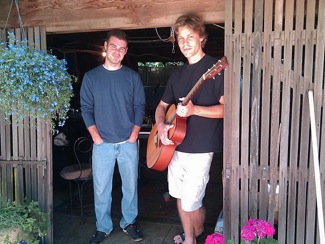 Jamie (keyboards) and Kellen (guitar and harmonica) provide all the vocals with a blend that brings to mind the Everly Brothers.  They’re joined by a trio of accomplished musicians in their own right: guitarist Kyle Poppen, drummer Henry Chadwick and bass player Mason Hutchinson.

Note: Jim Coffis is the son of Jimmy and the father of Jamie and Kellen. He is the publisher of a hyperlocal website, the San Lorenzo Valley News Network and a fan of InMenlo.