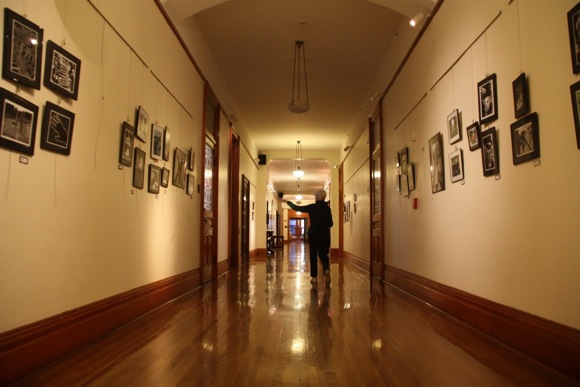 In August 1898, Mary and Gertrude Casey crossed the threshold of the new Academy of the Sacred Heart, joining 21 other boarding students at the school founded by the 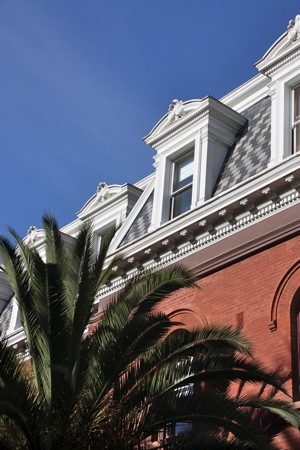 Society of the Sacred Heart religious order. The West Wing of the school had just been completed, the first of a planned four-sided, two-story building surrounded by a large center patio (Palm Court).

That original building suffered extensive damage in the 1906 earthquake. Writes Sister Nancy Morris in a booklet prepared on the occasion of the school’s centennial in 1998: “[In 1915] the West Wing is repaired and South Wing is added. Following instructions from the Mother House ‘to cancel the plan for a quadrangle building and to add a third floor to both the west and south wings with a Mansard roof,’ the nuns set about rebuilding after the earthquake.” (Photo of rebuilt building directly below.) 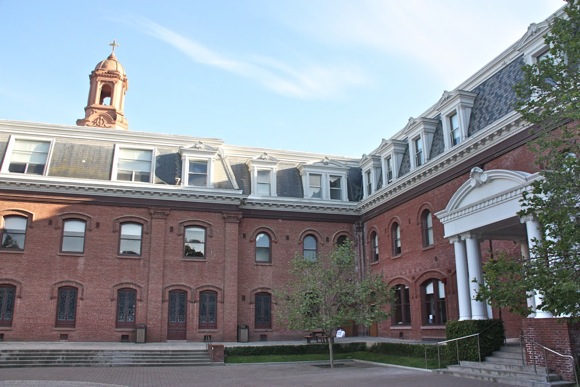 We recently toured the oldest, main building on the current Sacred Heart Prep school grounds, guided by Sister Nancy Morris, who served as the school’s Director from 1971 to 1989. It was under her tutelage that boys were admitted in 1984. She writes of her first memories of the campus: “Seeing ‘Menlo’ for the first time in 1953, I fell in love with the place — the beautiful brick building, which housed 54 nuns and 127 boarders at the time, seemed like a lovely jewel set off by a band of stately palms and venerable oaks.” 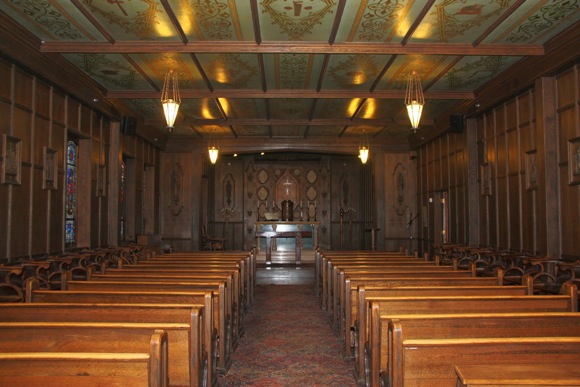 She showed her visitors the current chapel (photo above), the original chapel that is now the school’s library, and a number of parlor rooms. We stopped, in particular, to look at the stenciled windows (pictured right) . Explains Sister Morris: “A man by the name of Mr. Sizlo, native of 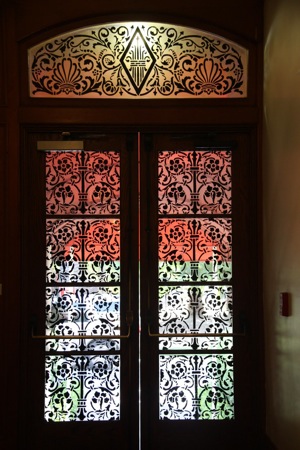 Chicago, did the stencils at Lone Mountain College (still there), at our Convent School in San Francisco, and at Sacred Heart. Several window panes had deteriorated or were broken, so one of our parents, Polly Stephenson, and I redid them about six years ago. It was a very difficult because we had to make a new stencil for every window. They were each different in size and design, and the stencil would break into bits each time it was pulled off the pane.  It was a pain — and it took all summer.  However, they do look good from a distance.”

Next fall Sacred Heart Schools will have just over 1,100 students from preschool through 12th grad for the 2011-12 academic year, split almost 50/50 between girls and boys. On the whole campus, there are 19 buildings and 88 classrooms. In the next 18 months, the entire Lower and Middle School campus will be rebuilt at which time five old buildings will be demolished, replaced with four new state-of-the-art and environmentally-friendly buildings.

It is sad knowing that the beautiful buildings
that I remember as a child will be torn down!
I know that we must make way for the new
and safer buildings…..God bless all who have
past through and all who continue to pass through.

I agree with Patricia..I also believe we might have been at Menlo at the same time. 1949-1953. I was a boarder and loved every minute of it. Having gone to 91st St. and Kenwood in the lower school, the California sunshine and atmosphere was most welcome. Then on to the San Diego College for Women for the icing on the cake!!