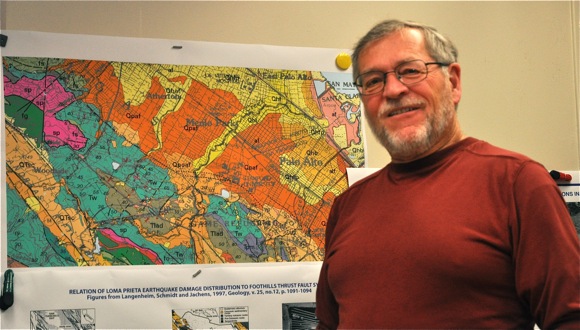 When Robert McLaughlin makes the trip from his coastside home to his job as a geologist at the United States Geological Survey (USGS) in Menlo Park, he drives along the Alameda de la Pulgas. Far below the surface is an earthquake thrust fault named the Pulgas Fault. We’re guessing this is news to most Menlo Park and Atherton residents.

Just to the west of both towns lies the much more famous — and potentially more dangerous — San Andreas Fault. Its movements are well documented. In northern California, its most notorious rupture occurred in 1906, although today’s residents are more aware of the damage it did in 1989 during the Loma Prieta quake.

We recently spent an early afternoon listening to Robert’s well-articulated explanation about local faults — how they differ and what danger they portend. He’s been a geologist at USGS for about 40 years and today finds himself one of the few on staff who have just a Masters rather than a PhD degree. He’s also largely a homegrown product.

“I’m was one of those people who started collecting rocks as a kid,” he said “I went to Carlmont High School, then the College of San Mateo before heading to the University of Nevada. During that time I got a job  field assistant’s job at USGS and ended up getting my Masters from San Jose State.” 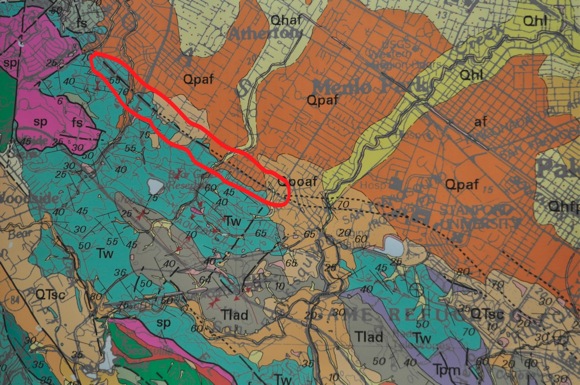 “A thrust fault rupture is the result of compression. The blocks move against each other, and one block moves over the other. And even though we clearly have seismicity associated with these faults, the magnitude of the earthquakes we see in a historical sense is a maximum magnitude of 4.5.

“The problem is when you don’t get a large earthquake — 6.5 or higher — the fault will not rupture all the way to the surface. There’s been very little if any good documentation about surface ruptures related to thrust faults in the last 11,000 year. These faults are not nearly as clear cut in showing a hazard as is the San Andreas, which makes them controversial. Because we haven’t found a recent rupture, it’s kind of speculative in relation to the hazard.” 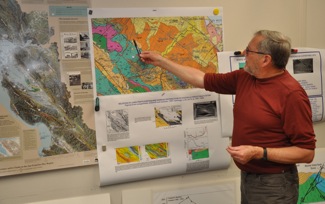 Robert recommends that local homeowners utilize the earthquake preparedness section of the USGS website, which offers good educational materials, including Putting Down Roots in Earthquake Country, a handbook put together specifically for the San Francisco Bay Area. He also suggests taking a look at the USGS seismic hazard maps.

The geology of Menlo and Atherton give clues to the degree of shaking that could occur in major quake. “If you live west of Alameda and closer to the foothills, it fairly hard bedrock,” said Robert. “As you move East and the land flattens out,  you’ll find old allevial sand deposits with bedrock closer to the surface. As you get closer to the Highway 101 and the Bay, you encounter soft sentiment — and a higher shaking potential.”