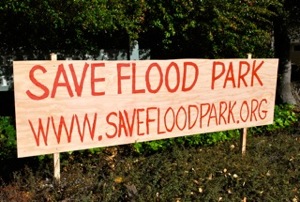 The County of San Mateo announced this past week that county staff is recommending a temporary solution to the reopening of Flood Park. They’ve recommended that the supervisors approve funds to reopen the park from about September 2011 to June 30, 2012. This recommendation will need to be voted on and adopted in July by the supervisors. This is a reversal by the county and a victory for our Save Flood Park group.

There will be a Save Flood Park community meeting Monday,  June 13,  at Cafe Zoe starting at 6:30 pm. It is designed to inform the Willows neighbors of the city’s and county’s plans for Flood Park.

Next Tuesday night, June 14, the Menlo Park City Council has Flood Park on its agenda. The Council will formally vote to approve the process of negotiating/investigating the sale of Flood Park from San Mateo County to the City of Menlo Park. This is also a positive move by the city to formally begin the process of investigating a possible purchase of the park. The temporary reopening by the county may provide the city with time to investigate and plan how they might purchase and operate the park long term.

Meanwhile, the grassroots neighborhood group, Save Flood Park, is in the process of becoming a new, formal 501c3 organization named Friends of Flood Park, which   has secured the Silicon Valley Community Foundation as its fiscal agent. It can now receive donations from neighbors who want to support Flood Park’s future through the Silicon Valley Community Foundation. Friends of Flood Park can be reached via email at Jill@savefloodpark.org or by mail at P.O. box 2267, Menlo Park, CA 94026.

The new organization will begin a fund raising campaign for Flood Park in earnest once the vote by the county to reopen the park and a decision to buy the park by the city have taken place. Flood Park needs funds to upgrade its current facility and Friends of Flood Park will take on this effort.