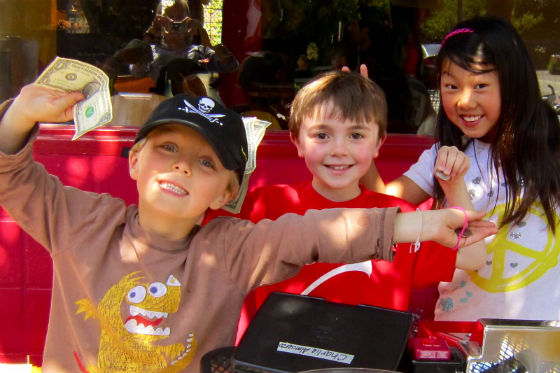 The refreshment stand set up in front of Café Zoe wasn’t just a fun weekend activity for the Willows kids selling Meyer lemonade and cookies. It also marked an important annual event for the neighborhood: raising money to help send 14 local homeless youth to summer camp.

As they did last year, the lemonade crew, along with Willows residents and local businesses have supported InnVision’s Summer Adventures program. Many of the kids living at InnVision’s Opportunity Center in Palo Alto have experienced chronic homelessness and the organization’s summer program is a bright spot for them and their families. But they lack bathing suits and other summer essentials, which is why Kristin Chandler, InnVision’s Peninsula Community Outreach Coordinator, turned to the Willows group for help.

Spearheaded by resident Dana Shields and Café Zoe owner Kathleen Daly, neighbors donated and assembled colorful totes brimming with beach towels, water bottles, sunscreen, and swim caps and goggles (courtesy of Menlo Swim and Sport’s Tim Sheeper). They also raised cash donations that Chandler could use to take the kids shopping to purchase bathing suits and flip flops (that actually fit!), as well as other expenses for the eight-week summer program, which starts next week. Some days the kids will spend at the pool or park, while on others they will go on outings to the movies, roller skating, Monterey Bay Aquarium, and other destinations — now fully funded by the camp drive. 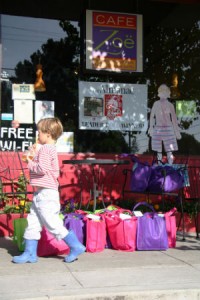 What’s most surprising about the effort is how quickly the donations rolled in at the eleventh hour. On Saturday morning, 6/11, cash donations stood at about $200 — less than half of the $500 goal. But a quick plea to the neighborhood email lists started the ball rolling, with neighbors challenging one another to pledge $20 each to the effort. The final results of this year’s camp drive? By the end of the weekend, after the anniversary celebration at Menalto Station, the total stood at $1,625. Add to that the $100 proceeds from a very successful lemonade stand, and the goal was blown out of the water.

While only the second time doing the summer camp drive (photo above left shows last year’s contributions), the Willows neighborhood’s relationship with InnVision goes back about five years. The neighborhood originally supported the organization’s Clara-Mateo Alliance, which was located at the VA Hospital on Willow Road, but was closed earlier this year.