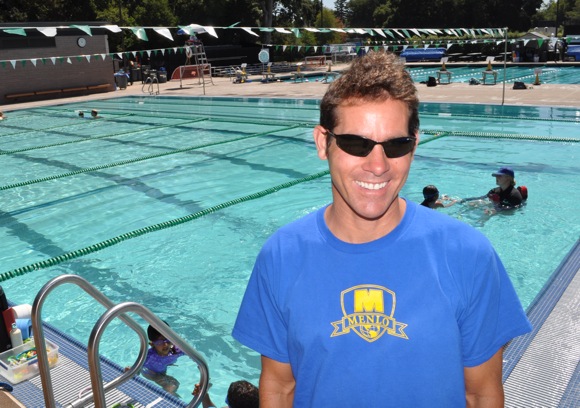 For those who grew up here in the 60s, it was easy to think of Menlo Park as the watery capital of the world. At M-A, you could sit in class next to Olympic swimming medal winners Anne Warner Cribbs (’62), Greg Buckingham (’63) and Dick Roth (’65), later joined by Olympic water polo player Chris Dorst (’73). And it seemed like there was a swim club on every corner – most notably Chuck Thompson’s on Glenwood Ave. and later Ad Janes on Willow Rd. (We’ve heard reports of Clyde Devine’s  too, but haven’t been able to substantiate where the OSU football player had his swim school.)

Today  it’s Tim Sheeper whose name is synonymous with swimming in Menlo. But as his legion of fans – and much of the community knows – Tim, who operates Menlo Swim and Sport at Burgess Pool, first found athletic success, not as swimmer but as a triathlete. He continues to compete as part of Team Sheeper and recently placed first in his age division and 6th overall in the Wildflower Half Ironman, posting a time of 04:35:52.

He now also competes in swim meets as  head coach and member of Menlo Masters and says he’s always been drawn to the water, calling it a “really happy place to be – when you finish a swim you feel better than when you started.”

Menlo Swim and Sports offers a myriad of programs for youth and adults, including swimming lessons, swim teams, water exercise, lap swimming, water polo teams, water safety classes and a summer camp. In the winter months, the instructional pool is covered by an inflated dome.

“We’re busy all year round,” says Tim. “What kicks up during the summer are the camps.” 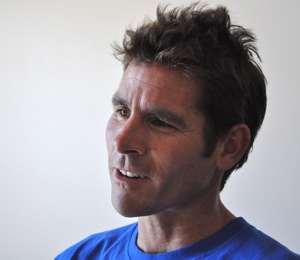 When Tim, through Menlo Swim and Sport, entered discussions with the City of Menlo Park to manage the new Burgess swim complex, which opened in 2006, there was a lot of heated discussion and resulting press. That conversation continues; a posting by a reporter on the Almanac’s online discussion board last fall generated dozens of comments displaying multiple viewpoints.

Now four years into the five-year operating agreement, Tim hopes that he’ll be able  to continue to operate the facility in the future; bids will be taken in May 2011. “We’ve worked hard toward our goal of being a hub of the community and are preparing for the bidding process,” he says. “The whole staff is always looking for ways to improve what we offer year over year.”

To that end, Menlo Swim and Sport is currently conducting an online survey to get feedback.

Tim lives in Menlo with his wife, who is also a competitive swimmer, and three children. “I was born and raised on the Peninsula but way north,” he says. “I was always moving south for the weather and liked Menlo Park’s small town feel. This community also presented a lot of opportunities, which I was lucky enough to have the resources to pursue.

“When you work really hard, more opportunities present themselves. We’re constantly trying to adjust and be flexible about the programming at the pool to please as many people as possible.”

Got an email from a reader who recall that Clyde Devine’s swim school was on Old County Rd either in San Carlos or Belmont.

Yes, Clyde Devine’s was on 261 Old County Rd. in San Carlos. I took swimming, boxing, wrestling, and tumbling there for several years. Still have a newspaper article cut out of myself with 6 other young kids doing tumbling and Clyde Devine. I remember I had a hard time climbing the rope and during a parent field day event Clyde said this kid has a pretty hard time of it and may not be able to climb the rope, which of course made me angry enough to do it. I think he figured me out pretty well. He was a nice man from what I can remember of him.

Yes, Clyde Devines Swimming and Diving School was on OLd County Rd. I took lessons there starting out diving from little trampolines. I’ve always retained my love of swimming and diving from my days there. Good memories, nice people!

Yes Clyde Devine was in San Carlos. My sister took diving lessons from him starting around 1970.

clyde’s was south of taylor way. i believe at the corner of northwood & old county. we went there in the 60’s. i was hit by a car, out in front, in the 70’s