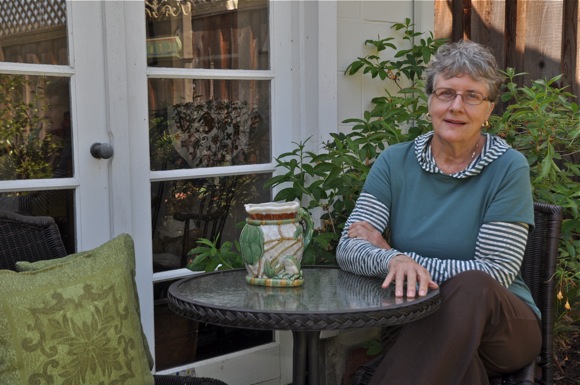 Pictured on the back of her book of poetry, Past Tense and Parts of Speech on Beech Street, are poems written on lined paper completed by Lynore Banchoff when she was growing up in South Pasadena. “They are silly little poems,” she says, “but it shows my early interest.”

It was South Pasadena, a bedroom community northeast of downtown Los Angeles, that Lynore says gave her a sense of community. “Wherever I’ve gone since, I’d had a life rooted in my neighborhood.”

She finds that true in Menlo Park, where she moved from the East Coast in 2005. 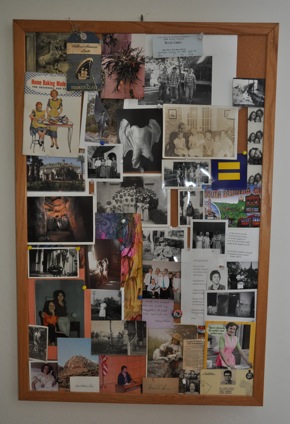 Before retiring she’d worked as a clinical social worker, a career she begun in 1981, about the same time she started writing poetry regular. “I was living in France at the time and had gone to England to visit a friend,” she recalls. “Riding back to France on the train, the poetry just began to flow — thoughts, emotions, reflections. I continued to write while abroad. I didn’t have the friends and distractions I had in the States.”

She worked on her book of poetry Past Tense with poet Bruce Snider, who she’d met taking continuing education classes at Stanford. In anticipation of her 70th birthday, they went through her body of poetry, rewriting and editing. “It was a wonderful experience,” she says. “I thought the process was as exciting as the product.”

Lynore thinks of herself as a visual person and there are numerous visuals in her comfortable Menlo home, including  a bulletin board of sorts of her life. “For me, it’s about being visual and putting the visual into words,” she says. “I think in metaphors. In poetry, there isn’t a topic that isn’t right — illness, death, nature, love, surprise.”

Last year, Lynore wrote her first play, which she says she needs to dust off and take another pass through. “My writing tends to be about human dynamics and that sort of thing,” she says. “I think of poetry as my public writing. Even when I try to write something in prose, I often feel the language is poetry.”

Lynore was good enough to give InMenlo permission to use one of her poems:

Yes, I will have a waffle.
I don’t want to regret in August
the food I denied myself in July.

Yes, I will love you today
and not look back in September
with an empty heart.

Why put myself on a diet
when I do not know
if I will ever eat again?