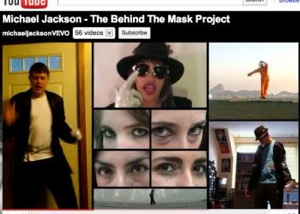 Thousands of fans from all over the world sent clips to the producers of a new Michael Jackson video, hoping they’d be chosen for this crowd-sourced tribute to the late pop star. Imagine the surprise of SLAC’s Michelle Smith when she spotted herself in the finished Behind the Mask Project video not just once, but twice.

“I can’t believe it!” said Smith, who works on the service desk in the Facilities Division at the Menlo Park laboratory. “What are the chances? You’re competing against the whole world, and you get your video in there twice. Maybe they thought it was two different people. It was so exciting to see myself — yes!”

The video, released June 14 in connection with a single from Jackson’s posthumous album, Michael, contains 1,600 video bits filmed by fans in 103 countries, boiled down to 4 ½ minutes.  Smith appears 1 minute 22 seconds in — she’s at top middle in a black fedora, sunglasses and a sparkly white glove — and again at 1:53 at top right, uncovering her face to reveal green lipstick.

Producing about 10 video snippets took hours, she said — a labor of love for this long-time Michael Jackson fan, who has two-by-four-foot pictures of him dressed as a Valentine’s Cupid, Easter Bunny and other holiday characters on her walls at home. Director Dennis Liu, who made the video for Sony Music and the Jackson Estate, had given fans explicit instructions for 40 types of contributions: They could sing the lead vocal, moonwalk, rip off their shirts, play an instrument, hold up title cards, create an animation or even film a pet dressed up like MJ.

What’s next? For Smith, it’s a weekend in Los Angeles with fellow Jackson fans. They’ll visit his crypt, the house where he was raised, his star on the Hollywood Walk of Fame and Neverland Ranch, among other events.
“He was so phenomenal and caring,” Smith said. “I miss him so.”