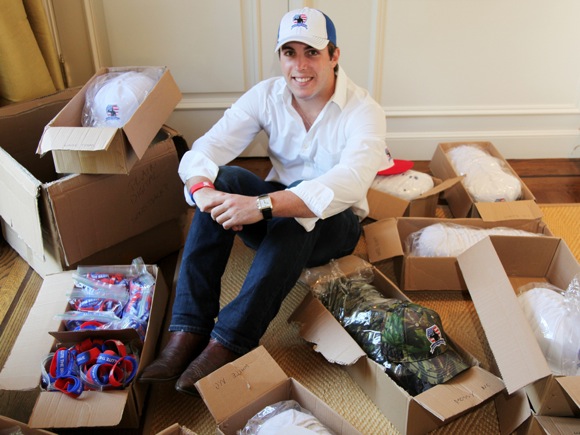 What started as a class project for University of Southern California business major Ryan Morris has turned into the recently-launched online store Salute the Brave, which offers military-themed baseball caps. Ryan, who uses the garage of his parent’s Atherton home as his warehouse and fulfillment center, has hopes that the caps will be the first in a line of other clothing items.

“More guys than girls wear baseball hats,” said Ryan by phone from Austin, TX, where he was rolling out the company’s campus rep program. “We hope to broaden the appeal by offering t-shirts, crew neck shirts, and tank tops, hopefully before the end of summer.”

For every hat that Salute the Brave sells, one is sent to a person serving in the U.S. military abroad by the non-profit group, Operation Gratitude, as part of a morale-boosting care package. “We’re talked to a few of the serviceman,” said Ryan. “They say the hats are a reminder that people at home are thinking of them. A few have found me on Facebook and thanked me — that’s been really cool.”

Ryan, who grew up in Atherton and graduated from Menlo School, has another year at USC before he’s completed his undergraduate studies but says he’s not particularly worried about juggling business and college responsibilities when classes resume in the fall. “I used to play collegiate baseball, so I’m used to spending an extra 40 hours a week on stuff outside the classroom.”

While he may be new to business, Ryan has retailing in his bloodline. His grandfather is Mervin Morris, founder of Mervyn’s department stores. “Before I did the class project, I ran the idea by him and we’ve continued talking,” said Ryan. “His advice: ‘You’re a smart kid, go with your gut — that’s what I did.’

“While my granddad’s experience in retail and clothing is invaluable, people should also know he’s the nicest guy I’ve ever met. And I really admire that he’s devoted a huge portion of his life to giving back through various charitable endeavors. I couldn’t ask for a better role model and mentor.”