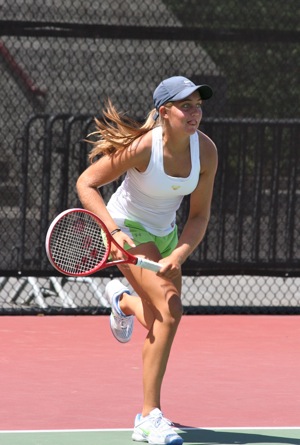 Menlo Park resident Mary Closs first picked up a tennis racket when she was around six, hitting the ball around with her mom, who’d grown up playing the game. But like lots of kids her age, tennis wasn’t the only sport she played. In sixth grade she decided to focus solely on tennis.

Now at 15, Mary, who will begin her junior year at St. Francis High school this fall, is finding success on the USTA tournament circuit. Currently she is ranked #2 in Northern California in the Girls 16 Singles and Doubles. She is ranked #46 nationally in the Girls 16s.

“I like competing, I like being on the court,” she says. “The fact that tennis is an individual sport really appeals to me. There’s a lot of strategy, both physical and mental. I like figuring the opponent out.”

At the recent NorCal sectional, Mary won girls doubles with partner Emma Marti, lost in the singles finals, and walked away from the tournament with the Sportsmanship Award. “I was playing 18s, so I feel accomplished that I got to the finals,” she says. 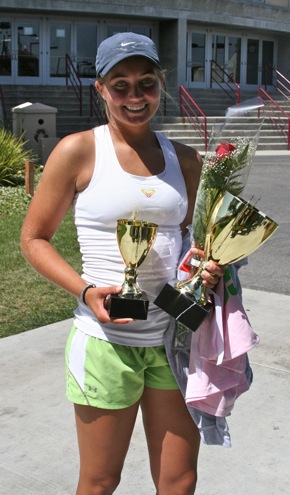 Division I college. “I’m just starting to thinking about where I might go,” she says. “Schools are allowed to contact prospective athletes during their junior year.”

She’s spending the summer playing in tournaments, including two national championships — one on clay and the other hard court. At the USTA National Open in Lakewood earlier this month, she reached the finals in the Girls 16 Singles; she and her partner Hadley Berg won the tournament Girls 16s doubles.

She traveled to Shreveport, LA, for the USTA Intersectional Team Championships, which is played on clay. Four girls and four boys were selected to represent Northern California.

During the school year, she practices two hours a day during the week and more on weekends. “My schedule last year worked out pretty well so that I could juggle practice and homework,” she says. “I’m gone a lot of weekends at tournaments, but when I’m home, it’s time to hang out with my friends.”

Any advice for young tennis players just starting out? “Hang in,” she says, “there are a lot of ups and downs. To improve you sometimes have to get a little worse before you can get better.”

Congratulations to Mary! Our whole family is so proud of you! Good luck as you pursue your dreams. We are rooting for you! 🙂 The Cook family