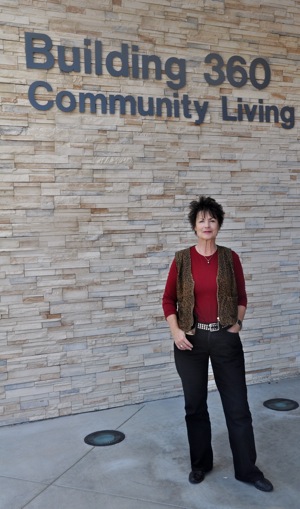 When you listen to Menlo Park resident Bonnie McGregor enthusiastically talk about her experience volunteering at the Menlo Park VA, you wonder why their aren’t hundreds like her.

“This is a wonderful place staffed by wonderful people,” she says. “You can just feel the warmth.”

Standing outside Building #360, a community living facility for older vets, Bonnie seems to know everyone coming in and out of  its doors. And she believes she shouldn’t be the only one: Her goal is to more fully integrate the Menlo and veterans communities.

“Recently the Menlo Park Chorus did a Memorial Day concert and have committed to doing a fall concert in October,” she says. “The inspiration and gratitude generated by these and other events is heartwarming. And it connects the two communities in a meaningful way.”

Call for food and sponsorship donations to support upcoming BBQ

To further stir the inter-community pot, Bonnie is helping plan a Western Family BBQ  for the veterans of building 360 and their families on August 6. It’s her belief that this group of vets has fewer opportunities for recreation. “There will be games for the grandchildren, a square dance exhibition, Western line dancing, and live country music,” she says. “We will have a special area where the veterans can have portraits made with their family members. It promises to be a memorable day.”

Having already lined up a corps of volunteers to help out (but don’t let that dissuade you if interested!), Bonnie is now looking for sustaining sponsorships — so that the event can be held annually — and food donations, for example, cases of diet and regular soda.

Donations can be dropped off at the administrative building at 795 Willow Rd in the Voluntary Services offices on the second floor. Sponsorship checks, which should be made out to Palo Alto VA (note, Bonnie says it’s very important to write on the memo line: MENLO PARK VA #360 BAR B Q) and mailed in care of Alberto Villareal, VA Voluntary Services, 795 Willow Rd., Menlo Park, CA, 94025.

Interested in learning more about the event and volunteering at the MP VA in general? Bonnie is more than happy to answer questions: (650) 322-0847,  bonnie.mcgregor[at]gmail.com.

Thank you so much Linda! Great exposure for the upcoming Bar B Q and volunteer opportunities at the Menlo Park VA.