Catching up with musician Sarah Ghandour 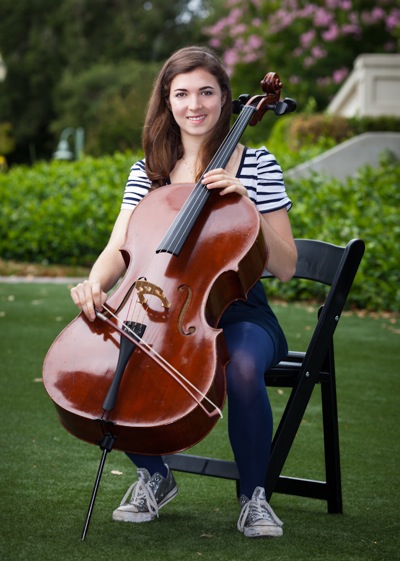 It was a year ago that we first sat down with accomplished cellist Sarah Ghandour. She was participating then — as she is now — in the Music@Menlo Chamber Music Institute. A year can make a  big difference in a young musicians’ life. In Sarah’s case, it’s been about trying out different ways to make music.

“In addition to cello and piano lessons, I started taking voice lessons, studying opera singing at the San Francisco Conservatory of Music,” she says. “It’s part of my goal to become a more rounded musician.

“I’ve also entered more competitions. Previously when I’d compete, I’d get super stressed. Now I try to look at competitions as practice performances, to focus on the fun, and be as musical as I can be. I’m finding out I get a lot better outcomes!”

On the immediate horizon is soaking up as much as possible during the three weeks she’s attending Music@Menlo’s Chamber Music Institute. “As always, I want to grow more as a chamber musician,” she says. “This year I’m hoping to develop some relationships with the artists and take some lessons from them.

“Because I’ll be going into my senior year at Menlo-Atherton this fall, I want to talk to the artists about their artistic journey and their experience at music school. I’m curious about their advice about just getting a music degree or pursuing a double major.

“I’m really looking forward to attending all the concerts because they are always inspiring. Finally, my goal is to master the music that I’ve been asked to perform this year. It’s a really wonderful repertoire.”

Sarah will be performing on the cello in three appearances, part of the Koret Young Performers Concerts: July 30, Antonin Dvorak’s Piano Quintet in A Major; August 6, Johannes Brahms’ Trio for Piano, Clarinet (or Viola) an Cello in A minor; August 13, Dmitry Schostakovich’s Two Pieces for String Octet. These free events all begin at 1:00 pm and take place the Menlo-Atherton Performing Arts Center.

Come fall, Sarah will be part of the new orchestra being formed at M-A. She’ll start auditioning for music school and squeeze in some fun with friends. “I still love going to the Stanford Theater,” she says. “And I enjoy dance. I take jazz, tap, and ballroom at the Menlo Park Academy of Dance.”