Twins Sara Jorgensen and Gail Morey: A passion for horses and competition 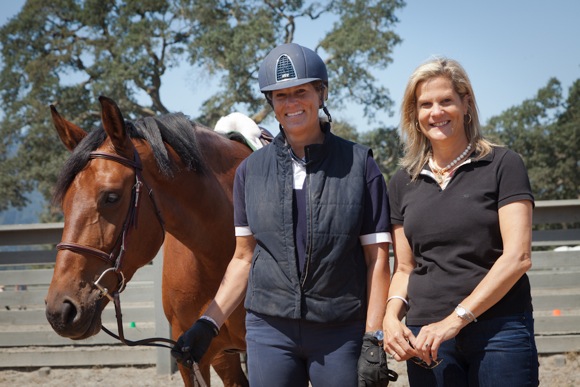 You notice it instantly. Twins Sara Jorgensen and Gail Morey are so in sync they finish each others sentences without interrupting each other. “We like each other a lot,” says Gail. That’s also apparent.

One of their lifelong passions is horses. Growing up in Atherton, they shared a horse until they were 15. “Our parents wanted us to support each other, to root for each other,” says Gail. “We’d trade show weekends. Sara has a better feel for a horse that is nervous. I tend to light up horses rather than calm them down.”

Both have competed for years at the Menlo Charity Horse Show, and this year they are sponsoring one of the Classics on the last day in honor of “one of our wonderful junior hunters, Trick or Treat,” reports Gail, who is sitting out the competition due to a shoulder injury. The Menlo Park resident’s two horses will participate, though, with her trainer showing both her hunter, Crown Affair, and jumper, Zigano.

Sara, who lives in Woodside, will be showing her newly acquired mare, a seven-year-old Belgian Warmblood named E-Star, known as “Bunny” around the barn. “I mean just look at those ears!” she says. They’ve been together since April and will be competing in amateur-owner jumper classes and the night-time speed classes on Thursday and Friday night.

“She’s an impatient mare,” says Sara. “She’s tricky getting into the ring. She likes to compete. When we have lessons and it’s not her turn she paws and jigs. But she’s also really sweet.” (And, we can report, seems to enjoy having her photograph taken!)

Gail says that neither of them view horses as commodities. “We get attached to them,” she says. “Our horses are retired when we stop showing. We sent two to a barn in Oregon because it’s so beautiful. They aren’t ridden, they just get to enjoy the countryside.  It’s the retirement they deserve.”

The Menlo Charity Horse Show runs from Tuesday, August 9 through Sunday, August 14 at the Menlo Circus Club. Admission is $10 per day; $35 for the week.