Strawberries with a difference, dozens of tomato varieties — all from Lucero Organic Farms 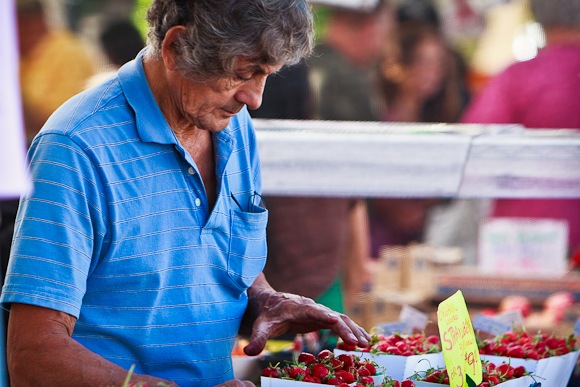 One of the longest standing vendors at the Menlo Park Farmers Market is Lucero Organic Farms, a 25-acre operation near Lodi. Ben Lucero (pictured) is joined by wife Karen and son Curtis in bringing only the tastiest produce to market.

Menlo market regulars welcome, in particular, the family’s long-stem Seascape strawberries. Smaller in size than typical California strawberries and a relatively new variety, Seascape was developed by breeders at the University of California at Davis.

“We tested several different varieties but settled on Seascape because we liked the texture, taste and size,” Ben told us this morning, explaining they’re also problematic, given that he grows them inland when they were bred for the coast. “We’re a little short at the moment due to the July heat when they all ripened at once. We couldn’t keep up with the picking and lost some. They’re an ever-bearing variety so we’re starting to catch up.”

Strawberries are just one of the Luceros’ crops. In addition to cucumbers and squash, Ben and family also grow 60 varieties of heirloom tomatoes. This morning well over two dozen were at the market, with a mix and match price of $1.99 a pound.

“Our customers all seem to have their own favorites, but there’s quite a following for the Pineapple and Zebra varieties,” said Ben. “This year we planted yellow Sam Marzano for the first time.”

Lucero was once a year-round farm but Ben said he now shuts down after the first frost of the season. “There are only so many cold weather crops, so everybody tends to grow the same things,” said Ben. “We take a few months off and let the other farmers get their time at the market.”