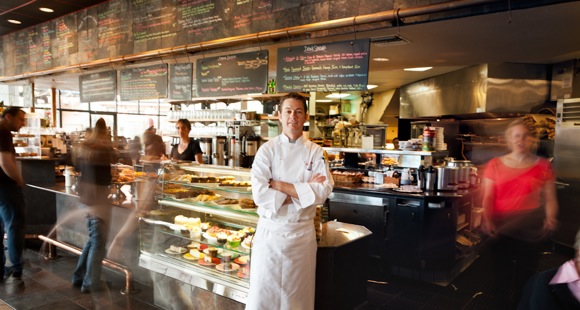 That Cafe Borrone chef Josh Pebbles is cooking professionally is not surprising.  “Restaurants and food have always been a big part of my life,” he says. “My mom was a waitress at various places locally and I’d get dropped off after school where she was working. My first job was as a dishwasher at the Little Store restaurant in Woodside, and I worked in the produce department at Roberts. Plus, my father had a huge vegetable garden.”

Josh has been at Cafe Borrone since 1995, starting as a server and gradually getting a few shifts in the kitchen. Along the way, he spent some time cooking in Italy and taking classes at the Culinary Institute in Napa, where he recently spent a week focusing on small plates. He cites wife Marina Borrone as his inspiration, calling her a “phenomenal cook.”

For the last five years, Josh has been full time in the kitchen. While there, he’s done some innovating, adding dinner items to the menu after 5:00 pm, relying on local farms for many of the ingredients. Patrons used to good cafe food are now treated to fine dining but in the same casual atmosphere. “The evening menu is very seasonal and much smaller,” he says. “We can play around with it a bit and have fun with it. The feedback is tremendous and positive. People are surprised, even by the change in plates from the daytime.”

Pressed to name what he feels his cooking strong suit is, he cites grilling. “I love the grill, particularly for meat. But I also love hand rolling the pasta we serve.”

The father of three, Josh says he manages to juggle responsibilities thanks to living close by in Menlo Park. “We have a garden, which teaches the kids where things comes from,” he says. “And when I’m home, they’re with me every step in the kitchen, wearing their chef outfits. Kids, the restaurant, and food — that really sums up my life!”

Dinner is served at Cafe Borrone Tuesday through Saturday evenings.