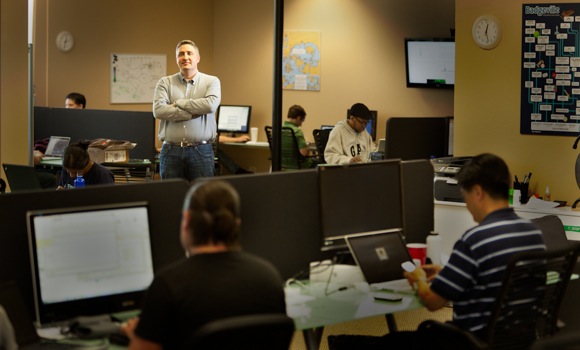 Like a dozen or so other startups, Badgeville is hiding in plain sight in a nondescript downtown Menlo Park office building. But that doesn’t mean it’s going unnoticed. According to CEO Kris Duggan, the 18-month-old company, which recently received an additional $12 million in funding, is expected to do between $5 and $10 million in sales this year. By year end, he expects Badgeville to have grown to 50 employees and 100 customers.

Badgeville is in the “gamification” space. Ask Kris about it and he quips, “It’s a silly word. We were actually against using gamification at the beginning, but it had already taken hold, so we put ‘smart’ in front of it.”

“Think of it as providing a motivation and behavioral system,” Kris explains. “Virtual awards of status and reputation are powerful motivators. To people, they represent accomplishment.”

The first Badgeville office was on High St. in Palo Alto, but the company outgrew that space and were attracted to downtown Menlo Park because it was more affordable, there was good parking nearby — with permits obtained from the city — and the location was close to a variety of shops and restaurants. They will soon outgrew their current space but plan to stay in downtown Menlo. “I think it’s so much better to work in space like this than some isolated office building,” Kris says.

Kris has started or worked for more than a half dozen startups, and says he learned the basics of being a serial entrepreneur from his father who was also a entrepreneur. “I’ve modeled a lot of behaviors after him — drive, competitiveness, organization, discipline. And along the way I picked up some management skills.”

Even with the somewhat frenetic pace of new startup up, Kris maintains a work-life balance by getting home in time for dinner with his wife and two children most nights a week. “I coached a Litte League team this year — the Badgeville Cardinals.”

He also flies remote-controlled sail planes competitively. “They look like gliders but go really fast,” he explains. “My aspiration is to make the U.S. team and compete internationally in Romania next year.”

In the meantime, he’ll be busy shepherding Badgeville to success and making it a company people want to work for—  in downtown Menlo Park.