Spotted: The ever dwindling neighborhood mailbox 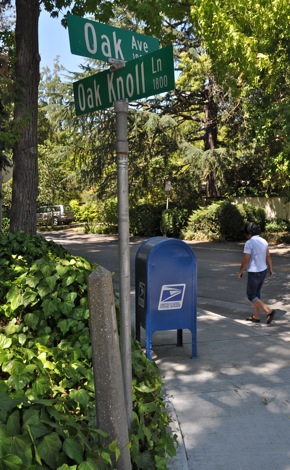 If you value your neighborhood mailbox — and want it to stay put — then start using it to mail letters. At least that’s the message in an article in today’s San Francisco Chronicle, which says: “If a mailbox gets fewer than 25 pieces of mail per day over a six-to-eight-week period, it gets targeted for removal.”

That was to be the fate of the mailbox pictured on the corner of Oak Dr. and Oak Knoll Lane in west Menlo Park earlier this year. A notice appeared announcing that it was “slated for removal.” But it stayed, we can only presume because “business” started to pick up. Just a few feet away — and immediately adjacent to the street sign — is the remnants of an earlier mailbox, the kind that was mounted on a pole. The Chronicle has a photo of just such a box. The Menlo Park pole is inscribed “1945,” making this a long time “mail friendly” corner.

Surprising that there was a mailbox there in 1945. The Cedro Cottage (site of Oak Knoll School) was only demolished in 1952, and the remaining 16 acres of Stanford pasture land leased to a developer for housing. I guess the date on the pole might only indicate the date of manufacture. So in principle (but I think unlikely) the pole could have been installed after some of the nearby housing was constructed, which would be about 1955.