On the 10th anniversary of 9/11, eight questions for Fire Chief Harold Schapelhouman 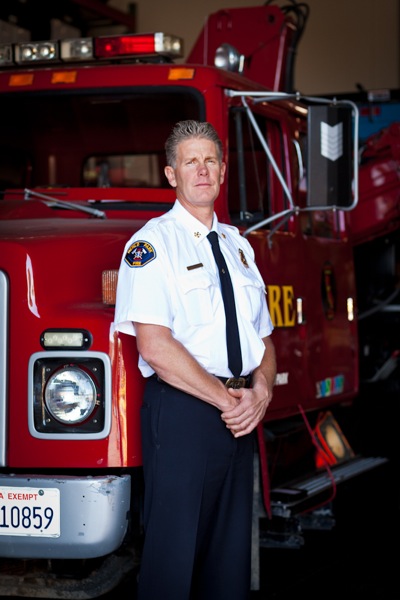 Fire Chief Harold Schapelhouman has spent the last 30 years with the Menlo Park Fire Protection District. Named Chief in 2007, he was the first internally selected candidate in over two decades. Before his promotion, he served the District as firefighter, dispatcher, engineer, rescue driver, truck driver, fire investigator, captain, battalion chief and deputy chief.

The Chief, who is of Dutch heritage, was born in Canada, emigrating to the United States in 1963. He became a U.S. citizen in 1976. One of the first schools he attended was Bethany Lutheran in Menlo Park.

He took part in the rescue efforts following both the Oklahoma City bombing and the attack on the World Trade Center on September 11, 2001.

The  Fire District provides emergency services for Atherton, Menlo Park, East Palo Alto and unincorporated areas of San Mateo County. We sat down with the Chief in the Fire District’s administrative offices on Middlefield Rd.

InMenlo: Did you always want to be a fire fighter?

Chief: When I was a kid, I wanted to be a forest ranger. But then I became a police explorer scout and began to think about law enforcement as a career. At a friend’s suggestion, I took a fire service class and immediately was struck with the idea that being a fire fighter was a better fit for me. It’s all about helping people and that’s how people perceive you, as someone who’s going to help them.

InMenlo: I’m presuming actual fire calls are fewer in number than other services the District provides. What might residents find surprising about the District?

Chief: You’re correct. Of the 8,000 or so calls a year, 63% are medical. What might surprise people is that the Fire District is older than any of the jurisdictions we serve. It was founded in 1916, the same time as Camp Fremont. With its formation,  fighting fires was transferred from volunteers to professionals.

InMenlo: What were your influences growing up?

Chief: My father was a concentration camp survivor. Until his later years, he didn’t talk about it much, but my aunt was a great story teller. In my mind, all those stories I heard as a kid connect to the emergency preparedness and response I’m involved in today. My friends growing up were children of camp liberators; I was a child of camp survivors. I learned a lot about family preparedness and how to endure hardship.

InMenlo: As Chief, what’s a day on the job like for you now?

Chief: Ninety percent of my job is administration. Getting off the trucks wasn’t an easy transition for me initially. I still go to multiple alarm fires. I still listen to the radio, and my pager is always on 24/7. My job is to be here when the community needs me to be here.

InMenlo: What do you do for relaxation, to give yourself a change of pace?

Chief: When of the few things I do just for me is riding my mountain bike. I’ll do between 60 to 100 miles of mountain and road work a week. I need to be able do something that challenges me physically. It’s a good form of exercise and mental relaxation. Being Dutch, I come from a generation of bicycle people.

InMenlo: Given your heritage and that you like the outdoors, being a cyclist probably wouldn’t surprise people. What about you would surprise people?

Chief: I collect fire and disaster-related stamps, postal cards, and letters and add to my collection by going to stamp shows. I view every one of them as a piece of history, a snapshot in time. One of my favorites is from a San Francisco hotel the day of the 1906 earthquake. I also have a pen from Pearl Harbor and the front page of a Honolulu newspaper from Dec. 7, 1941.

InMenlo: Any thoughts or reflections on the Menlo Park rescue teams’ participation in the 9/11 clean up?

Chief: I’m somewhat uncomfortable with the notoriety the fire service received subsequently. The heroes were the first responders, many of whom lost their lives. But somehow the entire fire service became this larger than life entity. In my opinion, there was too much attention, too much tribute — it was over the top. Suddenly fire fighters could do no wrong. But as individuals, we’re normal people — and we make mistakes.

And while 9/11 did inspire departments and communities to be more thoughtful about disaster preparedness, the basic job of being in the fire service was not changed by the event. We’re still here to serve our communities and solve problems whether it’s a cat stuck in the tree, the smell of smoke, or the fact Johnny has his hand stuck in the toilet. If it doesn’t involve crime, people call the fire department.

InMenlo: Can you sum up how you feel about your chosen profession?

Chief: This is a great profession. Protection of life and property. Honor, duty, service, and sacrifice. You have to have the compassion to put others before you. That’s not always easy at 2:00 in the morning. We’re public servants. And I take a lot of pride in being a public servant.