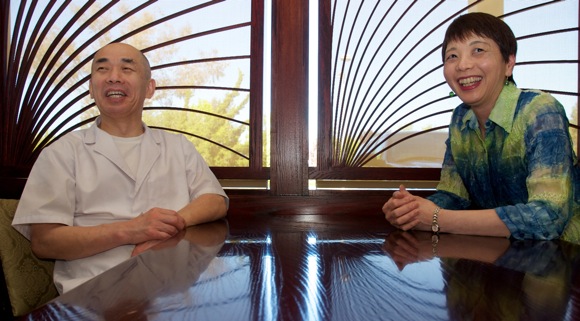 Editor’s note: For almost two decades, Toski and Keiko Sakuma have been an ever-present part of the restaurant scene in Menlo Park. Earlier this month, they announced that Kaygetsu, located in the Sharon Heights shopping center, was closing at the end of September. We asked Keiko to share some memories and thoughts. She emailed this reply:

“Toshi has been in the restaurant business all his life, starting at the age 16, as a sushi apprentice in Japan. He started his career as a restaurateur in 1985, opening Sushiya on University Avenue with his business partner.  I helped him out in the beginning, but I wasn’t involved in the operation after the first year as I started to work as a  CPA (although I did books for him).

“Back then, we were on completely different schedules, and we didn’t see much of each other.  Then, in 1994, I decided to change my career and joined him to open Toshi’s Sushiya on El Camino in Menlo Park.  It was a very popular restaurant, but it was too hectic.  After nine years, we wanted to do something other than a sushi restaurant and opened Kaygetsu to let people in the Bay Area know that there’s much more to Japanese cuisine than just sushi and teriyaki. We took a huge risk to do that.

“We started to receive some recognition after two years, being on the top 10 list on Zagat and on the Chronicle’s Top 100 for five consecutive years. We couldn’t believe we actually accomplished all that. However, it wasn’t an easy feat. We’ve spent most of our waking hours on Kaygetsu — it’s like having a child that needs a lot of attention. We haven’t had much time to ourselves, and no life beyond the restaurant.

“We’ve been feeling for the last couple years that we can’t keep on going like this any more. We’ve been running non-stop for a while and need to stop now.  We wanted to make some lifestyle change so that we’d have time to enjoy life while we can.

“We have been very fortunate to have met so many wonderful people through Kaygetsu. It is truly a bittersweet moment for us as we’re saying good bye to our customers. We didn’t realize that we’ve been an important part of so many people’s lives. I was telling one of our regular customers that we’re closing the restaurant, and her young daughter began to cry. I felt like crying, too.

“We’re ‘retiring’ from the restaurant business. Toshi will be working somewhere after a short break, but not as much as now. For myself, I’m planning to take a few months off, then I want to figure out what to do next. Both of us are looking forward to our next chapter in life!”

Note: Kaygetsu is fully booked for dinner but, as of this writing, there were some lunch openings. An article in the Almanac reported that “Tomonari and Keiko Mitsunobu plan to open Restaurant Mitsunobu at the same spot as soon as the liquor license transfers, probably by the second week of October” and that “current executive chef Shinichi Aoki will stay on.”