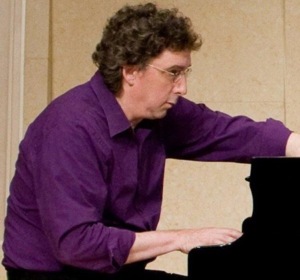 Thomas Schultz has established an international reputation both as an interpreter of music from the classical tradition – particularly Bach, Beethoven, Schubert and Liszt – and as one of the leading exponents of the music of our time. He has been a member of the Stanford music faculty since 1994.  In recital at St. Bede’s Church on Saturday, Sept. 17, at 7:30 pm, his program will include music by Beethoven, Schumann, Busoni and Hyo-shin Na.

Among Schultz’s recent engagements are solo recitals in New York, San Francisco, Berlin, Ghent, Seoul, Taipei and Kyoto, and at the Schoenberg Festival in Vienna, the Piano Spheres series in Los Angeles, Korea’s Tongyoung Festival, the Festival of New American Music in Sacramento and the April in Santa Cruz Festival, and in chamber music performances with the San Francisco Contemporary Music Players, the Da Camera Society of Houston, Robert Craft’s 20th Century Classics Ensemble and the St. Lawrence String Quartet.  In 2005, he gave  a series of masterclasses on the piano music of the Second Viennese school at the Schoenberg Center in Vienna.

His recitals are notable for programming that celebrates the continuing vitality of the piano repertoire, juxtaposing the old and the new, or focusing solely on new works.  He has worked closely with such eminent composers as Cage, Feldman, Wolff, Rzewski, Earle Brown, Jonathan Harvey and Elliot Carter (in performances of the Double Concerto at the Colorado Music Festival and at Alice Tully Hall in New York).