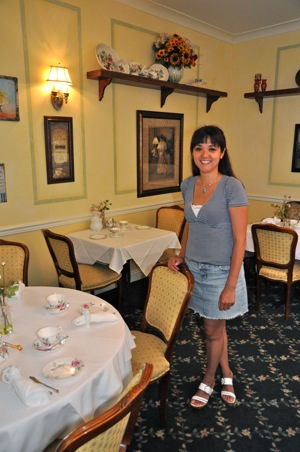 Thao Nguyen was well steeped in tea when she took over Lisa’s Tea Treasures near the train station in Menlo Park, already owning Tea Time in Palo Alto. “I sort of fell into the tea business,” she says, “but I always knew I’d own my own business some day, so this is my dream realized.”

While tea time is traditionally late afternoon, most of Thao’s customers come for lunch, often to celebrate a special occasion, sometimes just to catch up with each other. Lisa’s Tea Treasures is also a favorite spot for bridal and baby showers.

Patrons have the choice of over 20 different kinds of teas. People looking for a traditional tea service will be delighted to find fresh Devonshire Cream, made on the premises. (Does that make it Menlo Cream?)

Lisa, who’s never been a coffee drinker, tends to choose her teas depending on the time of day. In the morning she prefers a strong breakfast tea like La Maison Russe. “We call it Earl Grey Floral here,” she says. “It features hints of rose petals and orange flavoring.”

In the afternoon, she favors a green tea called Jasmine Dragon Pearls. At night she switches to herbal tea, free of caffeine, of which Rooibos from South Africa is her favorite.

Born in Vietnam, Lisa grew up in Europe, mainly in Denmark. She moved to the Netherlands after marrying a Dutch man. Now she is an enthusiastic Californian, living here the past six years.

“I love the California sun,” she says. “Every day when I’m driving on the freeway, I feel happy. Maybe it’s because I grew up in a country where there is only five weeks or so of sunshine.

“But it’s more than just the sun. This is the first country where I’ve felt truly at home. It’s so diverse. I felt like I stuck out in Denmark, but here I’m just one of many. That feels good.”

Lisa’s Tea Treasures is open six days a week; closed Mondays. And, for the curious, yes, there was once a Lisa, who opened not only the Menlo Park tea room but about 10 other Bay Area locations; she’s been out of the business for a number of years.