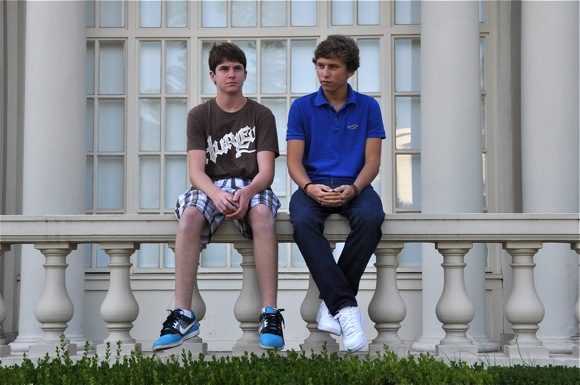 In the category “how I spent my summer vacation,” Menlo School sophomores Colin Martin (left in photo) and Matt Linton can claim “creating the Zombie Survival iPhone game” and founding a startup, CM Studios. That they did is in part due to their being selected to participate in the eight week Teens in Tech Labs incubator program.

It was Colin who came up with the idea for the game. Matt’s parents showed him a newspaper article about Teens in the Tech Labs, which was their route to making it happen. “We were trying to figure out how to make this app but had no idea how to do it,” said Colin. “Teens in Tech taught us what to do and how to do it.”

Added Matt: “It was a great learning experience that will make it easier for us to be successful in the future.”

Matt and Colin said that while they weren’t the youngest teens in the incubator program, they were by far the least experienced. “Neither of us had any coding experience before the summer,” said Matt

The free game has been downloaded over 1,000 times from the Apple iTunes store. They describe it as a simple zombie game with waved defense. Zombies enter from one side and you shoot them. Between rounds you can go to an arsenal and buy better weapons.

“Both Matt and are huge gamers,” said Colin. “And we love zombie games. I think the best games are simple games.”

Are more games in their future? Maybe not right away. “I really enjoyed making the game and it was incredibly fun,” said Matt. “The truth is making a game at our level was extremely difficult. Maybe we’ll make more games but right now we’re working on a website-based project having to do with plagiarism that’s a lot easier to code.”