Mitchell Confer: Reflecting on life through his art 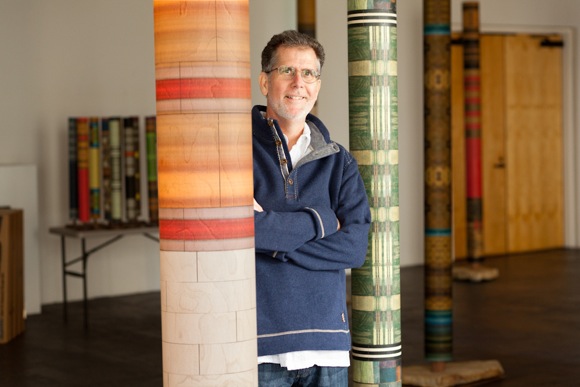 Editor’s note: Mitchell Confer passed away at his Menlo Park home on Feb. 20, 2012; the cause of death was melanoma.

When artist Mitchell Confer was diagnosed with cancer, he says his world flattened out and changed. But his altered perceptions, including an increased spirituality, led him to his latest endeavor: totem pole like structures that he calls “kōr sam-pəls”. Composed of mixed media on birch, the works are on display through October 29 at The McLoughlin Gallery in San Francisco.

“I had the idea for the totems, but had only done sketches,” he says. “But 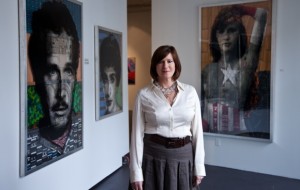 Joan McLoughlin [pictured right] kept persisting and I kept relapsing. I got to the point where I thought I was going to die and everyone around me thought so, too. But then something changed. I started work on the totems and slowly climbed out of the pit.”

Mitch is quick to give credit to his assistant, Doug Andreae, without whose help he couldn’t have completed the project. About the completed works, he reflects: “I kept thinking if I do this show, what am I going to do? How can I show the world what I’m going through without being offensive? How can I do it in a symbolic way?

“I started thinking about patterns. I thought about people. I thought about where I’d traveled. Even when you’re in a crisis situation, you go back to who you are and your patterns. Who you like and don’t like. You somehow fall back into regular life.

“At the same time, everything is like a strata, it’s day by day. I started thinking about the lines. There are tight lines and blurry lines. Colors and values transmit those feelings on a specific day. It’s very eclectic. It’s who I am today.”

Mitch, who’s lived in Menlo Park for 13 years, says that now that the artworks are completed and on display for the public to see, he’s grateful that he was not only able to finish them but that people are able to see a part of him not seen before.

“I also got hope,” he continues. “Regardless  of whether we’re talking about art, disease, or economics, I think humans need hope. It allows us to get up and build for the next day. I’m hoping that somebody looks at this artwork and gets something out of it, that people are able to take something away from it. That they, too, get hope.”

That is a wonderful way to express art , I love the concept of core samples as totems. Your story and art is inspiring.
Thank you for sharing, Sharon Harper