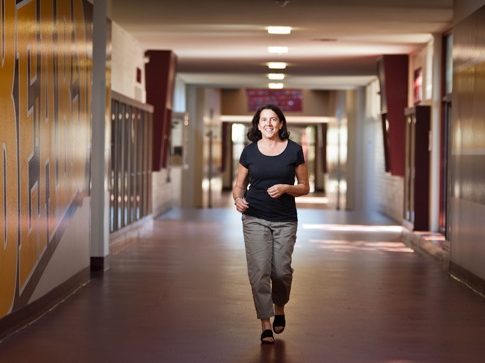 Menlo-Atherton High School college adviser Alice Kleeman views her mandate simply: to diminish the stress related to the college decision-making process. That means making her self available 24/7 to students. She gives out her mobile number and has created a Facebook page for the 519 seniors who make up the class of 2012 to ask her questions.

“If students think they have someone around the clock to help them, that will diminish stress, whether or not they take advantage of the service, ” says Alice, who is starting her eighteenth year at M-A.

Any student or parent who’s benefited from Alice’s knowledge and  generous spirit, knows what a gift she is to the M-A community. The Foundation for the Future recognized her achievements, making her the recipient of its most recent Classified Staff Award. And when authors Robin Mamlet and Christine Vandevelde needed an expert to assist them in putting together their just released book, College Admission, they sought out Alice.

While other institutions have coming knocking on her door, there’s no place she’d rather be than at M-A. “I  think we’re trying to do something magical here,” she says. “We sometimes succeed, and we sometimes don’t. But every single day I make the right turn into the parking lot, I feel  good. It may be exhausting at times, but it’s never boring.”

Alice believes that every person who wants to go to college should go, not that everybody should go to college. She finds the toughest part of her job is helping students who lack documentation — for example a Social Security number — with the admission process.

There is also the issue of combating the notion that there are only 25 or so colleges “worth” going to.  “I know there are hundreds and hundreds of great college options,” she says.  “We have happy students at colleges that people have never heard of. Focusing on prestige doesn’t make any sense. The focus should be on what is good academically and personally for the individual student.”

Somewhat tangential to the “only 25 colleges worth attending” notion, is parents who insist on micromanaging the college-selection process. “The families who move through the decision-making process the happiest are those where the student is leading the charge,” she says.

Alice made an appearance in every senior classroom throughout September. In addition, seniors receive an email from her every Sunday with college admission information and upcoming deadlines. About half of the students will take the initiative to meet with her one-on-one. Observes Alice: “By the time they’ve made their decision, I know I’ve succeeded if they say, ‘That was fun. I got to think about who I am and what college I’m going to be comfortable in for the next four years.'”

Sweet photo, Scott. Call me cheesy, but it makes me think of this John Mayer song. http://www.youtube.com/watch?v=DdmcxrQLKaM

Vanessa: Although Alice may run through the halls of her high school, she would never tell a student to stay inside the lines. Thanks for your comments.

like like like this article! One can’t say enough about Alice and the level-headedness, dedication, and energy she brings to M-A. SO very glad you highlighted her! The wonderful photo portrays her normal self–smiling, energetic, determined. Thank you for introducing Alice to those who haven’t yet had the fortune of being under her influence!