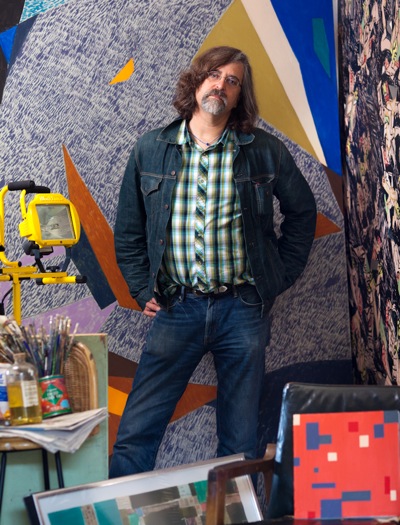 While artist Michael Pauker works primarily in oil, it’s his collages that are currently being exhibited at Cafe Zoe in Menlo Park. They are indicative of both his curiosity and his tendency to gather.

“Collage is an accurate but simplistic way of describing them,” he says, sitting in his appropriately cluttered studio. “There are elements of printmaking and drawing. I tend to work in bursts and completed about 30 of them in a course of a month or so.

“Integral to these pieces is being a gatherer of things. I love old paper. I love history. I love language. I gather all the historical documents I can find, but not in a linear, systematic way. Rather, it’s an excuse to be immersed in 18th- and 19th-century paper.”

Michael is a new Menlo resident but has lived in the Bay Area since 1987. By the time he was 15, he knew he wanted to be an artist and he got an MFA in art from Mills College after attending the State University at Purchase in his native New York state.

“I’m driven by curiosity,” he says. “Where it comes from I can’t tell you; it’s just there. And early 20th-century modernist art is the thing that I keep returning to.”

Michael transmits some of that curiosity in classes he teaches at various at local colleges, including Menlo College. “I do love teaching but in an ideal world — when my boat comes in — I’d teach one or two classes a week, not the four or five I do now.”

His curiosity is also displayed in the variety of artworks he creates. “As an artist, I’m not a one-trick pony,” he says. “Some artists find success doing one thing and stick just with it. But my curiosity is omnivorous. I’m driven by images I’ve never seen before, both abstract and figurative.

“I never know what’s coming next. I’ve come to tolerate absolute uncertainty. It’s about the surprise of where I end up. And it’s what I love.”