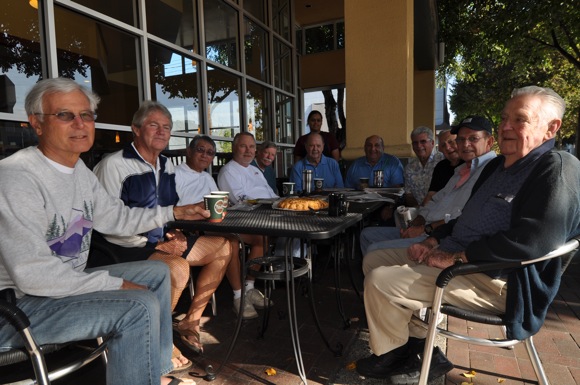 Many small towns in America have at least one spot where a few of the local retired (or nearly so) men gather regularly to enjoy a morning cup of coffee together. Such a group has been meeting in Menlo Park for about 40 years!

John Smith (now 83) and Frank Sasagawa (now 85), who had known each other for some time, began meeting fairly regularly for morning coffee in the early 1980s when they were organizing the Menlo-Atherton Credit Union, which later merged with the San Mateo Credit Union. They usually met at Johnny’s Smoke Shop on Oak Grove Ave. The back of Johnny’s facing Derry Lane effectively served as a local luncheonette staffed by Johnny’s wife.

At the time John, a graduate of Sacred Heart in San Francisco, was the Fire Marshal for the Menlo Park Fire Protection District. Frank, whose high school education at Sequoia (before M-A was built) was interrupted when his family was interned during World War II (he later graduated from Paly), was an engineer for the Menlo Park Sanitation Department, which later expanded and was renamed the West Bay Sanitation District. John retired in 1983, Frank in 1988, but they continued to meet for coffee at various locations around Menlo Park with other local men joining them. 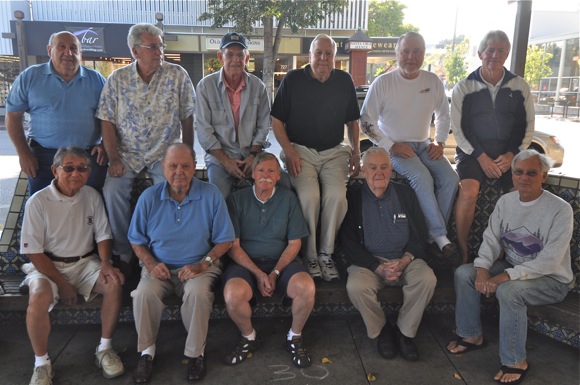 About 1990, Le Boulanger opened on the corner of Santa Cruz Ave and Chestnut St. This pre-war building has a spacious portico facing Santa Cruz Avenue that Le Boulanger equipped with tables and chairs. The space proved perfect for the group, so, with the blessings of the management, they quickly made it their regular venue. (On cold days the group retreats to one of the inside tables.)

Today more than a dozen regulars participate Monday through Friday, discussing sports, local events, and family happenings while enjoying their morning coffee. Most are retired fire fighters who grew up in the area and still live here, although there is a good representation of other locals. On a typical day a half dozen — almost always including John and Frank — will drop by.

The top photo shows most of the regulars sitting in their usual place in front of Le Boulanger. The second photo is the same group shown sitting on the bench and wall that is just opposite Le Boulanger with Santa Cruz Ave in the background. Those pictured include left to right, front row: Frank Sasagawa, Yogi Jorgensen, Rex Ianson, John Smith, Jym Clendenin; back row, left to right: Dickie D’Oliva, Gene Sullivan, Ollie Brown, Pete Ciardella, John Rohrer, Bill Hembey.

Errata: Two of the names in this posting are misspelled. The correct spellings are Frank Sasagawa and Rex Ianson.