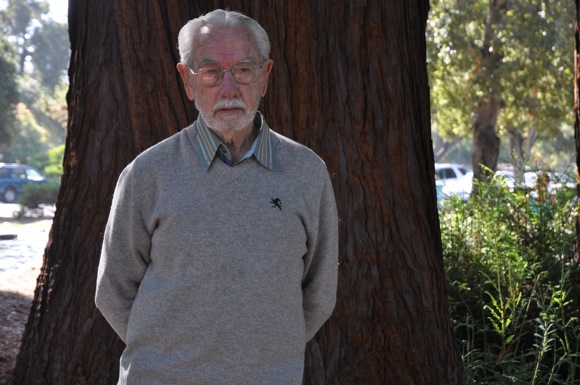 That Dick Angus didn’t live his adult life in Menlo Park or Atherton is a combination of circumstances. But Dick has deep local roots — deep enough that he’s currently president of the Menlo Park Historical Association, which will celebrate its 40th anniversary on Sunday, Nov. 13 with a program that will feature Michael Svanevik, co-author with his wife Shirley Burgett of Menlo Park, Beyond the Gate. Friends and guests are welcome at the event which, will run from 2:00 to 4:00 pm in the meeting room of the Menlo Park Library.

“I’ve always had a close attachment to the area,” he said. “My grandfather was groundskeeper at the Donahue estate and my mother was a Carter. Her father, George Carter, was fire chief. And I was born on a house on Winchester Drive that came to be known as the Angus house.” (Editor’s note: the house is still there, tastefully remodeled.)

Dick remembers how small Menlo Park was when he was growing up here in the 30s and 40s. “Maybe there were about 3,000 people. I went to Central School on El Camino between Oak Grove and Glenwood. I’d bike along El Camino to get there, although of course it wasn’t the busy street it is now.” 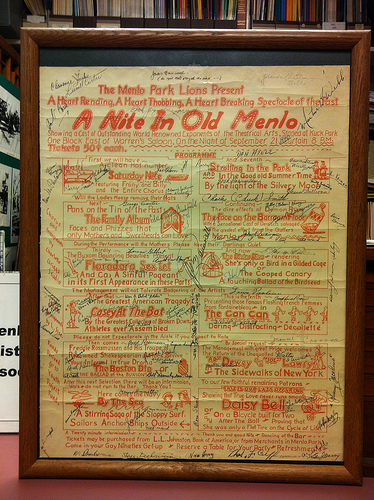 Recalling an era when everybody knew everybody else, he recalls going to a vaudeville-style show called A Night in Old Menlo, which he describes as “local folks performing various acts.” People would congregate at the Golden Churn, a creamery also on El Camino, for refreshments.

Then there were the big events of the era. There was a race track on what is now Menlo School, owned by the Gilmore family who owned Gilmore Steel, and local residents gathered to see the race horse Phar Lap unloaded at the train station, even though he was an Australian horse not well known as the time.

Unlike today, pre-war Menlo and Atherton had few activities for children. “There were church activities, and we did have the Boy Scouts and a baseball team. But in those days, you pretty much had to make your own activities.

“I would have liked to buy a house here but one thing led to another and it didn’t work out.”

Thanks to his involvement with the Historical Association, he keeps connected to the mid-Peninsula and the two towns that played such an important part of his childhood.

Dick tells me that his great-great grandfather on the Carter side started one of the first of the local sawmills (1840s and 50s), this one in La Honda.