Eric Sabelman: The many pursuits of a creative mind 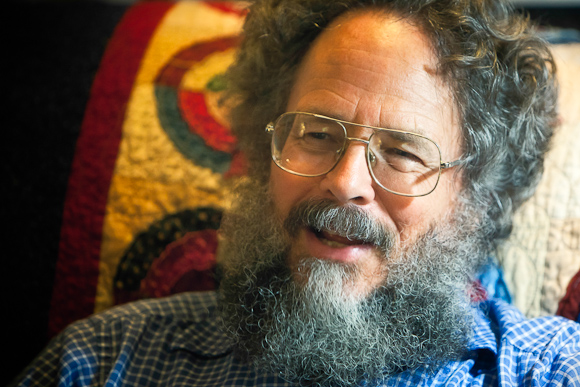 If you’re a Parkinson’s patient at Kaiser Redwood City, you may encounter Eric the Ph.D. (not MD) in the operating room. He’s invented some of the newer accessories that improve the implantation of a kind of pacemaker for the brain, calming the tremors often associated with the condition. “It corrects what’s wrong in terms of timing,” he says.

The medical device is also used for post-stroke pain, to treat Tourette’s syndrome, and occasionally for people with traumatic brain injury.

“Obviously, there’s a need for high precision,” Eric says. “I’m the navigator, helping guide the surgeon to put it in the proper place. And pre-surgery, there’s a need to hold the patient’s hand and explain the benefit.”

Eric became a peace and justice activist partially in response to 9/11. As a member of the Religious Society of Friends, he was the Quaker representative at Stanford, helping to plan the campus religious communities’ response to the attack.

“Rabbi Patricia Karlin-Neumann turned to me and said, ‘I’m glad you’re here.’ he recalls. “She wasn’t talking about me specifically, but about the Quaker’s reputation as peacemakers.

“There’s a bit of irony because most people my age were attracted to the Quaker faith because of the social activism and the faith’s anti-war stance. But I came to embrace those aspects latter in my faith development. I was initially attracted to the Friends for its mystical aspects, its communal silent worship.”

Eric, who is active with the local Multifaith Voices for Peace and Justice, admits it’s sometimes a challenge to merge the bio-engineer with the Quaker. “The ministry I do is sometime specific, like being called upon to be a mediator in a work environment. At other times, it’s more simply putting faith in action, being a good, compassionate person.”

Thanks to his ever- inventive mind, Eric is a lifelong tinkerer who has been awarded four patents, a number of which were awarded when he was with the Palo Alto VA. “I’m a member of TechShop and have a notebook full of things I’ve invented, mainly for use in neurosurgery.”

In a discussion that ping ponged between neuroscience and faith-based activism, Eric didn’t want us to depart without making us aware of yet another of his passions — professional storytelling. “I really enjoy telling stories in the fashion of wisdom tales,” he says, explaining that many are parables about a young man seeking true knowledge that had their origins in Quaker meetings.

Unlike his tinkering notebooks, the tales are stored in his brain, an apt place for a bio-engineer. But if you’d like to hear a few of them they can be found on two CDs produced by Tom and Sandy Farley of Palo Alto Friends Meeting.