It’s the time of year for the “persimmon people” 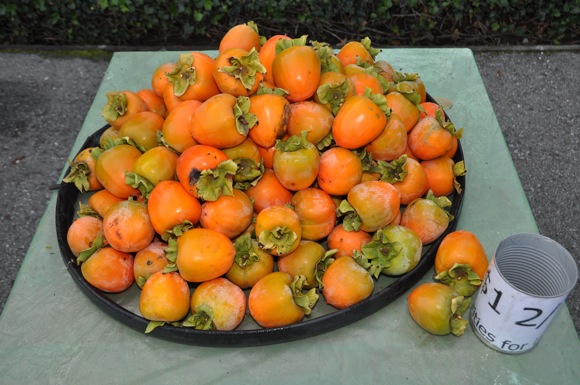 There’s a bit of an oasis among all the Hillview School construction crew cars that extend along Santa Cruz Ave. and make a right turn on Olive St. in Menlo Park. There at 999, like it’s been for most of the past 30 years, is a small table holding the bounty of late fall — persimmons. 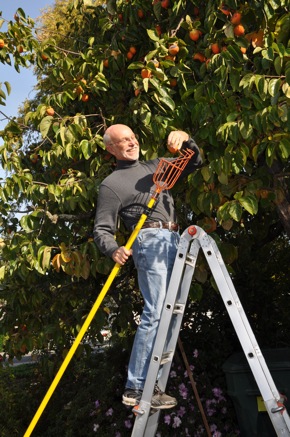 “People meet David and me and figure out where we live and say, ‘oh, you’re the persimmon people,'” said Haydi Sowerine.

The persimmons come from a tree in their yard that they think has been there since before World War II. “I was told when I bought the house that the land surrounding it used to be a dairy,” said David. “It was all open land from Olive up to Lemon Ave.”

After they married and combined their families, the Sowerines started putting their persimmon stand curbside in front of their home. “Initially we had two cans to collect sales money,” said Haydi. “One said ‘For Trinity youth group.’ The other said, ‘For Mom and Dad’s weekend away.’ The latter always was the sales winner.”

For the past few years, the Sowerines have donated the money that collects in the can atop the stand to Episcopal Charities. “It’s an honor system,” explained David. “Sometimes the money disappears a bit mysteriously but most of the time it stays put until mid-afternoon when we collect the day’s proceeds.”

This year’s persimmon stand appeared earlier this week. As is the case in most years, it will close around Thanksgiving. 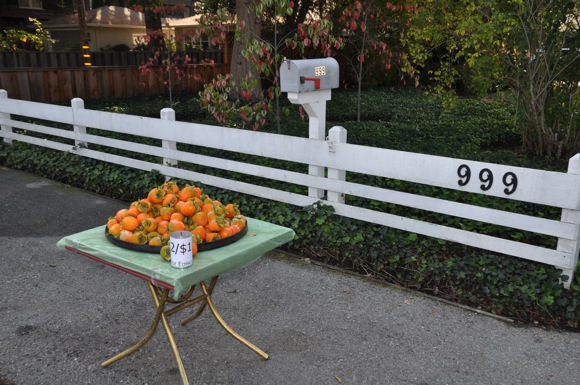 There is, of course, the question of what you can do with persimmons, which are not exactly an eat-off-the tree fruit akin to peaches or cherries. Some people use them to make persimmon bread, but thanks to a recent visitor to the stand, David has an easier option.

“A man stopped by and was excited to find the persimmons,” he said. “He told me that his Dad loved persimmons and used to freeze them and then eat the frozen fruit with a spoon like a sorbet.”