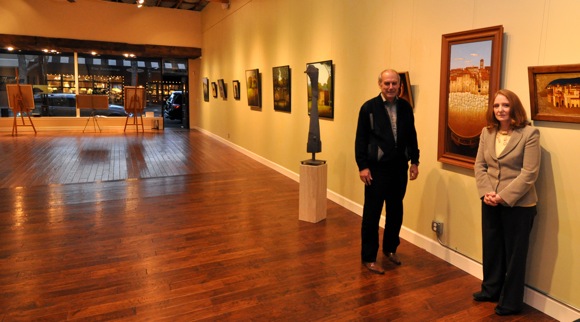 A couple weeks ago a light went on in downtown Menlo Park. Occupying half of the space vacated by Julie’s, Louise Erricson and David Himmelberger have created a large well-lit space to display unique paintings by artists they have found in their travels around the world.

This couple’s first gallery opened in Palo Alto in 1998. They called it Gallery Europa after the Europa of Greek mythology (often represented by a white cow, and for whom the lesser moon of Jupiter as well as a continent are named) to emphasize the worldwide nature of the art they were presenting.

There were problems in Palo Alto establishing a suitable location, so in 2004 they moved the gallery to San Francisco, calling it simply Himmelberger Gallery. Eventually they decided that the Mid-peninsula is actually a better venue for their art than tourist-laden San Francisco. Looking around, they chose Menlo Park for the sense of community the city exhibits and the attractive mix of retailers they find on Santa Cruz Avenue.

Louise, a native of Napa, is an author and artist. David began his professional life as a biostatistician at Stanford Medical School. That work motivated much of his early travel. He continues as an independent consultant, but now travels primarily in search of new art.