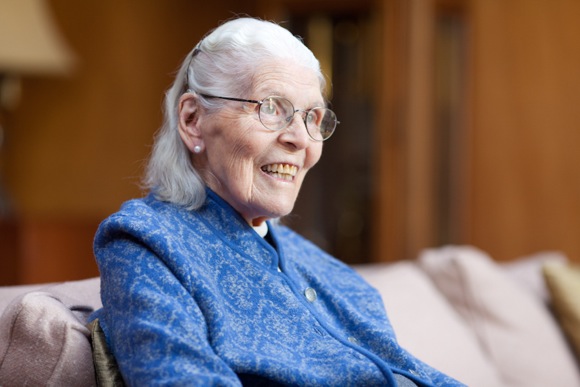 Miriam MacKenzie references what’s “creeping up on me.” “In January, I’ll be 95,” she says, her blue eyes sparkling with a mixture of astonishment and resignation.

Last summer there was a block party in her west Menlo Park neighborhood. Neither she nor the son who lives with her attended, but they soon got word about what had been a hot topic of conversation: Who had lived in the neighborhood surrounding Oak Knoll School the longest? The answer was Miriam, who moved into the house built by her and surgeon husband, Alec, in 1950.

Miriam remembers first seeing the empty lot, graced only by four oak trees. “I’d grown up on the Stanford campus where my father was in administration, so moving to Menlo Park when I was married and already had three children seemed like a good idea,” she recalls. 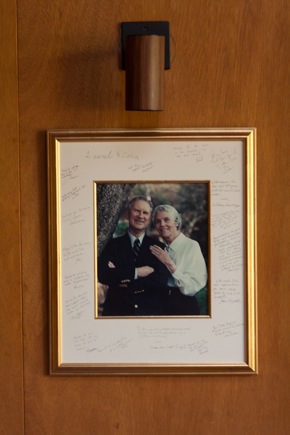 She thinks of her six children as two families, the first three — two boys and a girl — were born during the couple’s Navy years (“that’s how my husband learned pediatrics,” she says) and then three more boys were  born after she and Alec moved to Menlo.

Miriam attended Castilleja School from kindergarten through 8th grade and then Stanford, where she majored in history, “although I also could have had a psychology major I took so many classes,” she recalls. Asked what she planned to do with her college education, Miriam replies in a matter of fact manner: “I was just going to get married and have kids, which I certainly did.”

Her house became a magnet for all the children in the neighborhood. “I had a full-size freezer in the garage, and, given the size of my family, I’d buy a half a lamb and a side of beef,” she says. “But the big draw was the treats I’d make. They would disappear so fast I finally had to buy a padlock. That made me the wicked witch of Oak Knoll!”

After the kids left home, Miriam turned to her love of gardening. Husband Alec planted vegetables, and she tended to the flowers with spectacular results in the front yard, the better for passersby to enjoy. The home they shared was so well loved, there was a 50th birthday party for the house itself.

“Mom put together a scavenger hunt of all the important places in the house and around the yard,” says daughter Sandy. “All those years with all those children, piling them into the station wagon to get to all the activities, Mom was so well organized and so hard working.

“There were not only the six of us, but most of the time we had a grandparent living with us. And then she’d take in exchange students. I really look back on it all in awe.”

Miriam has another perspective on her happy years as mother and homemaker. “One of my sons asked me, ‘How come you always get to the top of what you’re doing?’ I replied to him, ‘Maybe I have some ability.’ But he said, ‘No, Mom, you were just a sucker.'”

We’re thinking he meant a sucker of the very best kind.